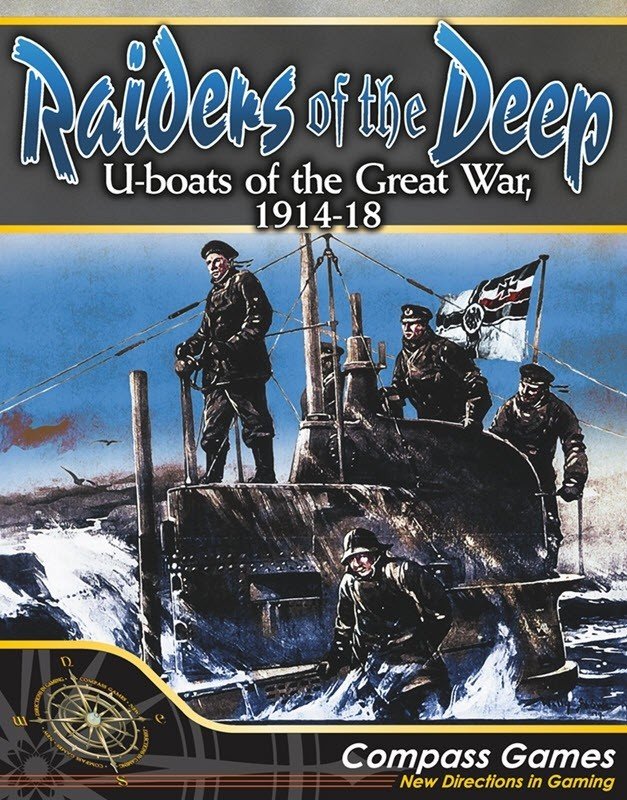 Raiders of the Deep: U-boats of the Great War, 1914-18 is a solitaire, tactical level game placing you in command of a German U-boat during WWI (known at the time as The Great War). Your mission is to destroy as much Allied shipping as possible, while advancing your crew quality, increasing your Commander rank, and attempting to survive until the Armistice and the end of the war. Raiders of the Deep is based on the popular Hunters game system by Gregory M. Smith and marks the first dedicated boardgame treatment covering WWI U-Boat warfare.

The story of the first U-boat war is one of the desperate battles above and below the waves, of piracy and atrocities, and of the frustrations caused by the maneuverings of politicians and military leaders who failed to understand the realities of this new kind of warfare. Raiders of the Deep offers players an opportunity to experience the story of that first U-boat campaign. It was a campaign that combined savagery and chivalry in equal measure, reflecting the twilight of the old system of warfare and the dawn of the modern age: an age of Total War.

The object of the game is to conduct numerous patrols in the role of a German U-boat Commander and sink enemy ships. You command one of 19 available German U-boat models which undertook missions. The success of each patrol is reflected by the total tonnage of ships sunk, which will result in promotion and crew advancement, and in receipt of the highly coveted Pour le Mérite award. Just as in the real U-boat war, the game system involves a great deal of chance (as was the case historically), but ultimate success rests on the decisions, you make during your career.

Game play is rapid and intense and centers upon conducting patrol assignments and resolving encounters at sea until safely returning to port. Upon completion of each patrol, you assess your success by consulting the log sheet, which may result in a promotion/award for yourself as Commander or crew advancement. Between patrol assignments, your U-boat is refitted for one or more months based upon damage incurred. You may also need time to recuperate from any personal injury before being able to conduct your next patrol. There are many unique elements of the The Great War captured in this game, including the impact of politics and technology advancements which changed the course of the war. Experience how the German government placed restrictions on U-boat commanders in order to court public opinion in neutral countries, and how the Entente navies’ desperate ramming tactics started to be superseded by the advent of the depth charge and advances in naval air power. The game also captures the difference in strategy and tactics in the various theatres where the U-boats operated.

This game is highly accessible to those familiar with The Hunters or Silent Victory designed by Gregory M. Smith (published by Consim Press). Game designer and WWI historian, Ian B. Cooper, answers the call of many who have asked for the same dynamic and tense gaming experience covering The Great War. While Raiders of the Deep is designed as a solitaire gaming experience, additional options for play are provided for both multi-player gaming sessions and organized tournament play.

Time Scale: 3-4 days per Travel Box when on Patrol