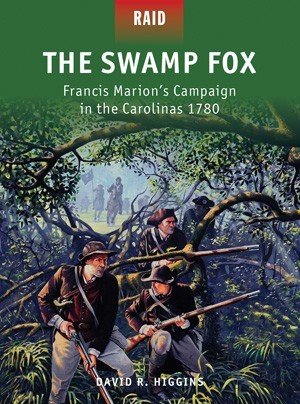 Raid: The Swamp Fox, Francis Marion’s Campaign in the Carolinas 1780

The American Revolution was deadlocked in the north, and in 1778, the focus of the conflict shifted south. Following his decisive 1780 victory at Charleston, Cornwallis launched a campaign through the Carolinas that was designed to expel American Continental and militia forces from the south. The subsequent patriot victory at King's Mountain forced Cornwallis to withdraw into South Carolina in what was one of the turning points in the Revolutionary War. To the southeast, Francis Marion enacted a series of successful hit-and-run operations. Cornwallis responded to this string of raids by assigning Banastre Tarleton to capture or kill the rebel guerrilla commander. What followed was an unsuccessful pursuit of the elusive Marion, in which Tarleton practiced a scorched-earth policy that ultimately disillusioned Loyalist sympathizers and hurt the British cause in the Carolinas. This book highlights the unique style of southern frontier warfare during the Revolutionary War, and how its combatants were supplied, organized, and operated. The series of actions between August and November 1780 illustrate Marion's unconventional efforts to hinder their enemy's war effort in the south- earning him his Swamp Fox moniker- and Tarleton's equally irregular efforts to counter it.