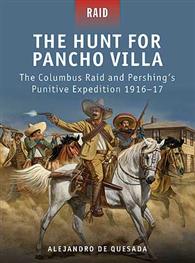 On March 9, 1916, troops under the command of Pancho Villa attacked Columbus, New Mexico and its local detachment of the US 13th Cavalry Regiment, killing 18 people and burning the town. Six days later, on orders from President Woodrow Wilson, General John J. “Black Jack” Pershing led an expeditionary force of 4,800 men into Mexico to capture Villa. What followed was a series of skirmishes, battles, and chases through the wild and uncharted Mexican countryside. While the Americans failed in their ultimate purpose of catching Villa, they did kill two of his top lieutenants. This book charts the progress of the entire enterprise, covering the dusty marches and the bitter gunfights in the streets of small border towns, analyzing the successes and failures of this unique military expedition.