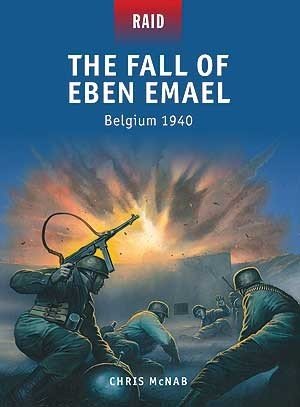 In early May 1940, the fortress of Eben Emael was a potent sentinel over the Belgian-Dutch borderlands. The fortress covered 75 hectares on the surface, had 5km of tunnels underground and was studded with bunkers, gun turrets and casemates. Add a garrison of 1,200 men and the natural protection of 60m-high canal walls, and Eben Emael gave the impression of near-impregnability. Yet on 10 May just 78 elite airborne soldiers managed to defeat this fortress in an operation of unprecedented tactical skill. Deployed by glider onto the very top of the fortifications, they utilized elite training, fast movement and specialist explosives to destroy many of the gun positions and trap much of the garrison within the fortress. Simultaneously, three other assault detachments conducted high-risk glider operations to capture critical bridges over the Albert Canal. By the end of 11 May, following the arrival of German infantry reinforcements, Eben Emael was in German hands. This Eben Emael RAID title tells the complete, fascinating story of this unique action.