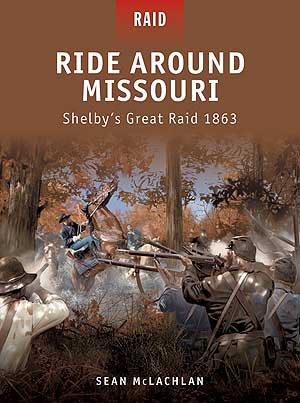 In July 1863, with the Confederacy still reeling from the defeats at Vicksburg and Gettysburg, Union forces pushed deep into Arkansas, capturing the capital of Little Rock. In response, Colonel Joseph O. Shelby launched a daring raid to disrupt the advance. Taking 600 men and a section of light artillery, he slipped behind enemy lines. Moving by night to confuse the enemy, Shelby captured a series of small outposts, collecting weapons and recruits as he went. As they continued their ride, the rebels tore up railroad tracks, burned bridges, and cut telegraph lines. Despite these successes, the Union troops slowly closed in on the raiders. Shelby fought a series of bitter skirmishes, until he found himself surrounded. Unwilling to surrender, Shelby led a charge through the Federal lines, bursting out into the open country and onto the road back to the Confederacy. While the results of this raid are still debated by historians, no one has ever doubted its boldness, and west of the Mississippi it became common to boast, “You’ve heard of Jeb Stuart’s ride around McClellan? Hell, brother, Jo Shelby rode around MISSOURI!”