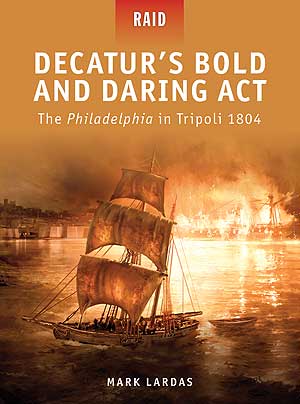 Raid: Decatur's Bold and Daring Act - The Philadelphia in Tripoli 1804

On a dark night in 1804, Lt. Stephen Decatur and a team of hand-picked men, slipped into Tripoli harbor in a small boat. Their target was the USS Philadelphia. Captured by the Barbary pirates four months previously, the Philadelphia had been refitted to fight against her former masters. Decatur’s mission was to either recapture the ship, or failing that, burn her to the waterline. This book recounts one of the greatest raids in American military history, an event that propelled Stephen Decatur to international renown, and which prompted Horatio Nelson to declare it ‘the most bold and daring act of the age’.