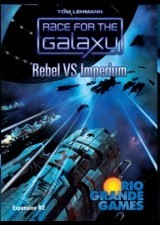 Race for the Galaxy Expansion: Rebel vs Imperium

As the Imperium crushes outlying systems, Rebel worlds begin to ally,politically and militarily. Meanwhile, the Uplift Code, within the genomes of the Alien Overlords’ former servitor races, is being sequenced.Can you build the most prosperous and powerful space empire in a galaxy where border conflicts rage?