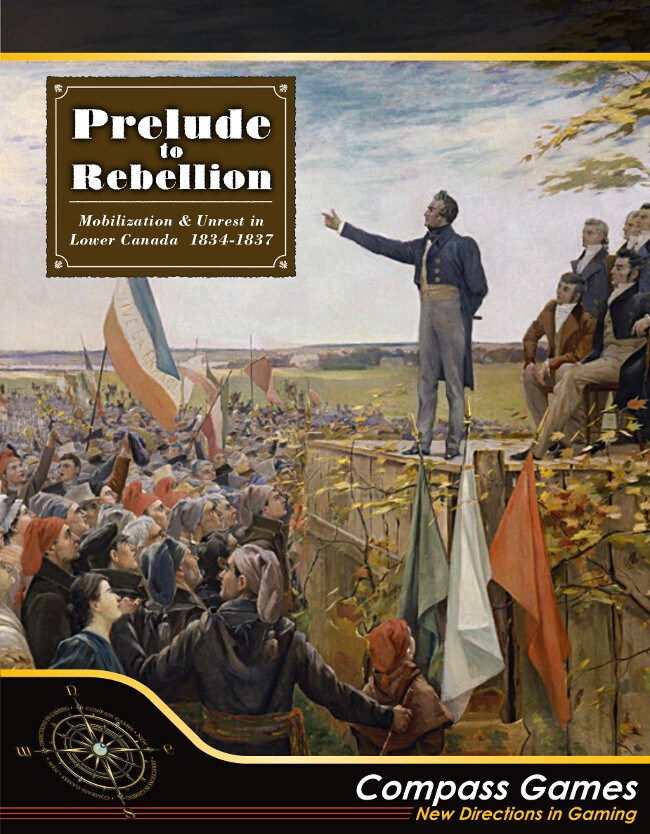 The Patriotes of Lower Canada became notorious for uprisings in 1837-1838 that prompted a bloody crackdown by the colonial authority. The battles that resulted from this escalating violence left quite a mark on the imagination and history of a modern-day nation unused to armed conflict on its soil.

But most Quebecers today know little about what led to these events. In the years before the rebellion, the demands for greater power for elected officials and for recognition of the Canadians' rights were at the heart of an ideological struggle between the Patriotes and a coalition loyal to the system in place under the British crown.

"Prelude to Rebellion" depicts this conflict of ideas as a card-driven game using key events from 1834 to 1837. In CDG-typical hand management, you will be torn between using each card’s activity points or event while doing your best to defuse your opponent’s cards. The gist of the game is that you will strive to mobilize the people of the various counties of Lower Canada and rally them to your point of view. In addition to Montréal and Québec (considered urban counties), 24 rural counties, each biased towards a faction, are represented on the board. Every county has a number of mobilization boxes, each costing a number of activity points to put a cube in it. Whoever has the most cubes in a county is said to control it.

After building up a sufficient amount of support in a county, you will try to create organizations (a grouping of leaders) in them. The more cubes in the county and the more activity points you dedicate to this action, the greater your chance of success. A fixed amount of opportunity points per turn allow you to mitigate the whims of the dice but also allow you to purchase helpful events from the 'Opportunity pool', where a few cards as well as key events of the conflict are put into at the start of every turn. Spend too many points to 'shave' a die roll and you might not be able to purchase a helpful card from the pool. Likewise, spend all your points to purchase cards and your next die rolls will be all the more stressful.

Urban counties control, rural counties control, organizations and external influence (how various surrounding powers such as Britain, France, the US, etc. are meddling in the conflict) represent the main source of victory points. Whoever has the upper hand for these four issues is accounted for on what's called a scoring track. Every time a card is played, a scoring die will be rolled. Whichever face turns up gets the associated scoring track closer to granting a proportional VP payload to the player ahead on it. Timing is everything as the scoring dice will constantly force you to adapt your strategy. Note that this mechanic is not completely random as each die has a greater chance to advance a specific track so skillful players will always come out on top.

The scoring tracks are right there on the board for both players to see. While each track will score in theory once a turn, in practice, the rural counties track might score twice while the organizations one will somehow get stuck for several crucial action rounds. You can't cheat fate forever though as each and every card play will trigger the roll of a scoring die. You will experience tense moments when all tracks are on the verge of scoring as well as moments of respite when all tracks just scored and there is a window of opportunity for you to try to improve your position on some issues.

This is not a wargame: the game ends when the fighting begins! Actually, both sides need to prepare for a war which might in fact never break out. The 'Rebellious spirit' track measures how close things are to get out of hand. The higher it gets, the more ugly and violent the conflict becomes. Just like in real life, the Patriotes might run out of time as some hot-headed leaders plunge the colony into a direct confrontation with the British army. People are fed up and the clock is ticking: if results don't start showing up, Lower Canadians might be tempted to take up arms, seeing how successful their Southern neighbors were 50 years before!

You've simulated more than your share of war. Now, play out what leads to it!

In 1837, Great Britain was at the height of her power, an international commerce hub dubbed as the 'Workshop of the World' thanks to its prodigious participation in the Industrial Revolution. British naval supremacy allowed the empire to control a quarter of the planet and defend its interests wherever they were threatened: the Falklands (1833), Aden (1839), Beirut (1840), Hong Kong (1841), Afghanistan (1842) and Crimea (1853). Despite those successes and following in the footsteps of the 13 Colonies 60 years before, half a million Canadians challenged British rule in an attempt to form an independent nation.

The 'Patriote' movement was first and foremost a political party, the very first in Canada's history, enjoying support from 80% of the population. Nonetheless the party was mostly powerless to conduct reforms with the real power lying with the British appointed governor. From 1815 the party was led by the charismatic leader Louis-Joseph Papineau who advocated rights and democracy for the French-speaking majority.

Opposed to the Patriotes were 100,000 'Loyalists', essentially colonial farmers or powerful merchants of British descent defending tooth and nail their commercial privileges and their link to the motherland. Located mostly in the cities of Montréal and Québec or in the Eastern Townships, these Loyalists clashed with the French-speaking farmers who mostly resided alongside the St.Lawrence River.

After the Patriote party landslide in the 1834 general elections, both sides held public meetings and mobilized the population until riots and skirmishes resulted in intervention by the police and the army, putting a bitter end to the conflict. Prelude to Rebellion simulates this exciting escalation extremely well, from the political to the military.

History tells us that in November 1837, the British Empire sought to nip this wannabe French-Canadian republic in the bud and succeeded. The results were 224 Patriote deaths with another 1,244 Patriotes being taken prisoner. Of this number, 12 were hung while hundreds more were exiled to the United States, Bermuda, or Australia. Britain sought to repress any further revolts. After the conflict, the Lower Canadian Parliament and its constitution were abolished. Martial law was placed in effect until 1841 : the biggest peace time military operation in Canadian history.

What Prelude to Rebellion teaches us is that history could have been entirely different. By reenacting key events between 1834 and 1837, a Patriote player may win the political joust or a Loyal player may fail to justify the involvement of the British army. What ended up being a crushed rebellion could alternatively have birthed a French-speaking republic, forever altering the course of North American history.