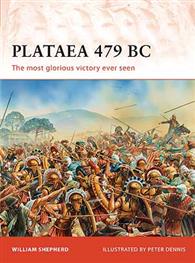 Plataea was one of the biggest and most important land battles of pre-20th century history. Close to 100,000 hoplite and light-armed Greeks took on an even larger barbarian army that included elite Asian cavalry and infantry, and troops from as far away as India, with thousands of Greek hoplites and cavalry also fighting on the Persian side. At points in the several days of combat, the Persians with their greater mobility and more fluid, missile tactics came close to breaking the Greek defensive line and succeeded in cutting off their supplies. But, in a fatal gamble when he nearly had the battle won, their general Mardonius committed the cream of his infantry to close-quarters combat with the Spartans and their Peloponnesian allies. The detailed reconstruction of this complex battle draws on recent studies of early 5th-century hoplite warfare and a fresh reading of the ancient textual sources, predominantly Herodotus, and close inspection of the battlefield.