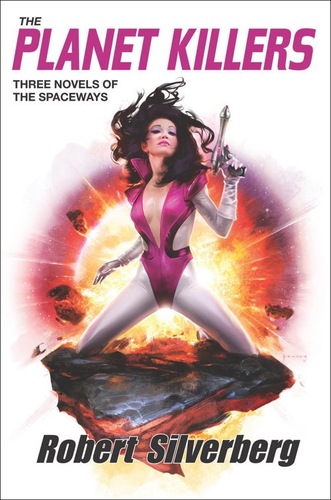 Three classic science fiction novels from Grand Master Robert Silverberg return to print for the first time in more than 40 years! These never-reprinted tales originally appeared in the influential Ace Double novel series, and represent a future multiple Hugo and Nebula Award-winning author bridging the explosive, action-oriented science fiction adventures of the early pulps with more introspective themes of the new wave that swept sci-fi in the 1960s.

In The Planet Killers, the Security Computers of Earth Central determine that the frontier world of Lurion will launch an all-out attack on Earth in 67 years, sending Agent Roy Gardner to the rough-and-tumble planet to ensure that doesn't happen—even if it means blowing Lurion to interstellar dust!

In The Plot Against Earth, Lloyd Catton, humanity's first agent of the Interworld Commission on Crime, must work with skeptical, suspicious alien agents to bust a hypnojewel racket that threatens the whole of the galaxy. Trailing the deadly, mind-sapping gems to the source unveils a multi-planet conspiracy, leaving Catton few allies in his frantic mission to save Earth itself!

In One of Our Asteroids is Missing, independent miner John Storm discovers an impossible asteroid rich with fabulously valuable metals and minerals, only to find his claim stolen, along with all computer records indicating that he had ever existed! Hunted by mining conglomerates and desperate to restore his jackpot find, Storm sets out into space to find his missing rock—only to discover that his find was far more valuable than he could have ever imagined.

Never before reprinted since their original appearances and with a new introduction by the author, these three novels of science fiction adventure blaze back onto the scene, revealing early masterworks of one of the genre's most gifted and celebrated storytellers!