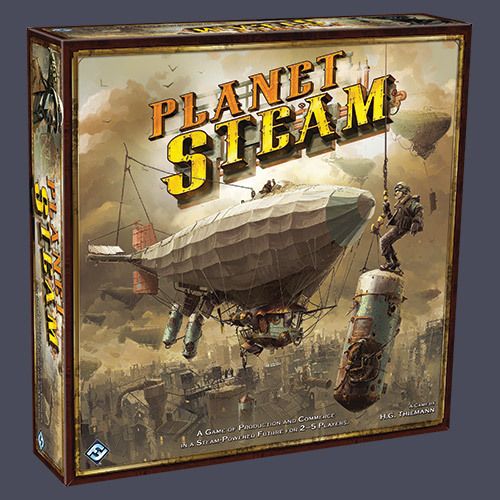 The discovery of valuable ores and other resources has led to the founding of a new colony, a veritable boomtown hidden away in an untouched corner of a steam-powered world. It won’t stay untouched for long, however; entrepreneurs from all over are boarding their airships and then risking a trip across the Boiling Sea to stake their claim. Can you outbid and outbuy your rivals to acquire the most wealth?

Planet Steam is a board game in which two to five players take the roles of entrepreneurs in a steampunk boomtown, racing to assemble equipment, claim plots of land, extract resources, and accumulate riches. After harvesting resources using tanks and converters, players must buy and sell those resources in a volatile and ever-shifting market. The one who earns the most income will, in the end, be victorious. However, only through shrewd resource management and clever manipulation of supply and demand can a player reign supreme!

More information can be found at FFG's Planet Steam website.