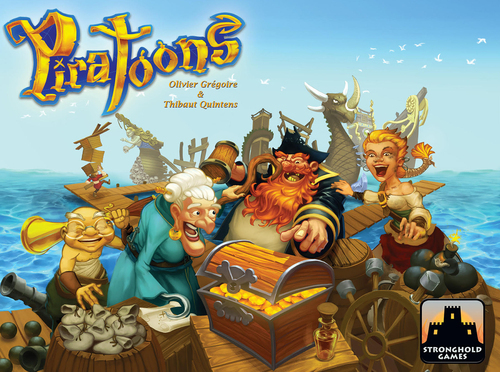 In Piratoons, treasure is sealed in the treasure chest. The chest is then physically turned over and opened. Each Pirate sends crew to plunder the treasure, which is boat parts or equipment. The more crew a Pirate commits to a piece of treasure, the more chance getting it… usually, but watch out for other sneaky Pirates! Unclaimed loot is auctioned off with doubloons earned by your crew. Pirates score points for having the fastest, largest, best ship, the most types of equipment, etc. The Pirate with the most points at the end of the game wins, becoming the most notorious Pirate of all!

Featuring two double-sided game boards, which form a treasure chest with raised edges, Piratoons is not only a great game to play, but also contains unique physical components, looking beautiful on the table.