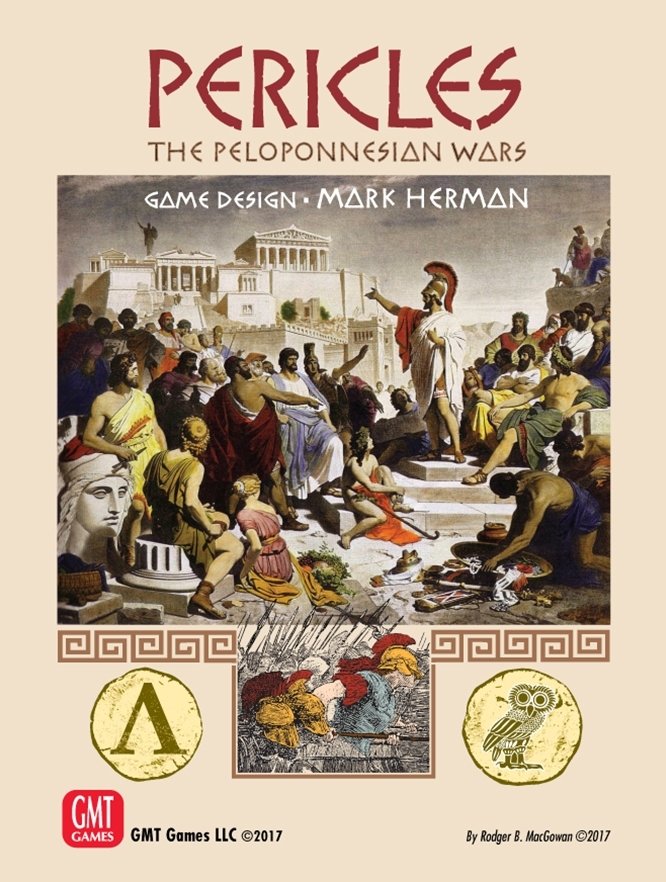 Pericles is a ‘sandbox’ (unscripted) wargame that covers the ENTIRE period of conflict described in Thucydides classic history on the Peloponnesian wars. Pericles is a four-player game, where two teams of Athenian and Spartan factions fight for Hegemony in 5th Century Greece. Each team of two represents a faction vying for control of their City States, strategy, and honor. Athens sees the Aristocrats debate issues with their opposing Demagogues, while in Sparta House Agiad and House Eurypontid contend for royal dominance.

Pericles uses elements from the Golden Geek best Wargame of 2015, Churchill, to simulate war as the extension of politics by other means. In the War portion of the game, it is US versus THEM (Athens versus Sparta), where each team implements their collective strategy to dominate Theaters of War, build economic strength, and fight battles to win Honor. In the respective Political assemblies, it is ME versus YOU (faction versus faction), where the battle for government control has to be balanced by your common interests in a series of wars that must be won, or all is lost.

Pericles uses an Issue Queue preplanning mechanic that the play testers have described as ‘insanely fun’. After your Political assembly has debated and won issues, these issues (military, league, diplomatic, oracle) are secretly placed on the military map in one of the twenty Theaters of war. If you or your opponents place a second issue into a Theater, it creates a queue of issues. Once all issues are placed, they are revealed and resolved one at a time. The order of issues in the queues and the order in which they are resolved across all Theaters tells YOUR story of the Peloponnesian wars.

Strategy in Pericles unfolds in how you create combinations of issues to achieve the historical narrative. Do you want to conduct a Periclean raiding strategy? Then you would play two military issues into a Theater to first move forces into position, then raid. Do you want to build a base in the enemy homeland (historically Pylos or Decelea)? Then you would conduct a military expedition, followed by a league issue. Do you want to raise an opponent’s ally in rebellion? Then you would deploy a diplomatic mission, and sow treachery for immediate or future advantage. It is in the placement, order, and resolution of the issues that the game allows you to explore and experience the broad range of historical situations without a script.

What would a game of Hoplites and Triremes be without a battle mechanic? Battle in Pericles is based on armies and fleets being led by the classic generals of yore, represented as Strategos tokens. During the Political assembly, each faction uses historical personalities to acquire Strategos tokens. Use the Spartan general Brasidas and gain four Strategos tokens, while Epitadas only generates one. Strategos tokens can be thought of as military capital that is spent in the war to lead and move forces. If you send forces to a Theater with enemy forces, a land or naval battle will occur. All players then secretly commit Strategos to the battle. Then, the commanding general of the military expedition and their teammate reveal their Strategos commitment and move wooden land and naval units to the battle. Now the defensive commitment of Strategos is revealed, each side then reveals a random battle card value, and the winner is decided. The winner of the battle now has the option to fight a subsequent naval or land battle. The outcome of these tactical decisions determines if any fortified bases are destroyed by assault or siege. Then the next issue is resolved. Winning battles awards and reduces honor.

Players will experience periods of Peace, where most action is conducted with Allied forces (Delian and Peloponnesian League), or periods of War where Athens and Sparta directly enter the fray. The end of the game is not set, and factions from the opposing sides can conspire to declare Peace, gain honor, and control the timing of how a game of Pericles ends.

But what do you do if you cannot get four gamers together? Fear not, Pericles comes with Strategy tables for both sides and rules to play Pericles with 3 humans, 2 humans, or in single human mode. So, no matter how many or how few players you can get to the table, you can take a walk through the Athenian agora (market) up to the Pnyx (Assembly hill) and debate policy with Pericles, while trying to both gain control of the government and win the Peloponnesian Wars.

MAP SCALE: Theaters of War in and around the Aegean