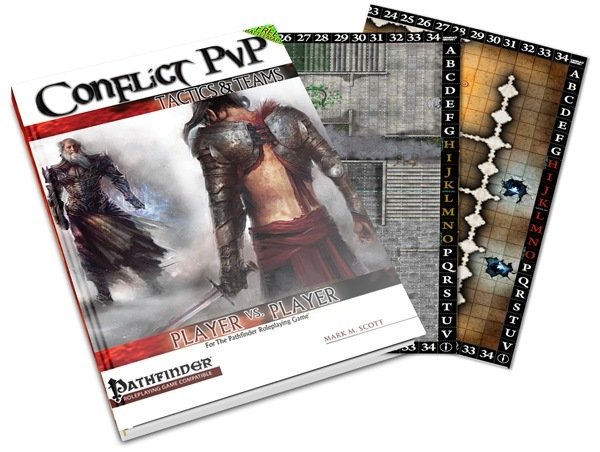 Conflict PvP adds advanced team vs. team mechanics and rules to the Pathfinder RPG. Resulting in raw, brutal, yet governed competition! Play with a team or as gladiator styled individuals. Conflict offers scenarios suitable for both styles of play. These scenarios and rules are much more than just death-matches. Instead, matches are driven by scenarios with clearly defined objectives that must be completed in order to win. Plus, hidden movement is real in Conflict PvP, so don't even think about Metagaming it.

Seasoned with over three years of experience in the trenches of PvP combat, this updated edition offers a whole slew of new material for your destructive pleasure:

In Conflict PvP, you are faced with an enemy with strengths similar to your own. Your chance to succeed boils down to your wits, guts, execution and luck—in that precise order. So, if you think you have what it takes to outsmart real-world prey, then grab your dice bags, work on your own overconfident smirk and starting running with Conflict PvP!

So, can you build a team that can beat the characters on the other side of the table? Well, there’s only one way to find out…