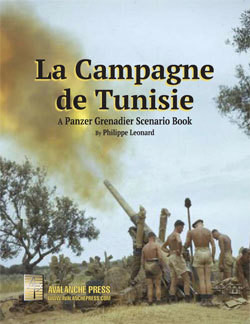 APL-0880
$23.49
In stock
1
Product Details
Publisher: Avalanche Press
Players: 2
In order to play you will need: An Army at Dawn and Conquest of Ethiopia

In 1942, Allied forces invaded North Africa, while Axis troops marched in to resist them. The French Army of Africa fought against both of them. This is a thing that really happened.

In La Campagne de Tunisie, designer Philippe Léonard (1940: The Fall of France) tells this story in a series of 12 Panzer Grenadier scenarios, as the French fight the Americans, the Germans, the British and the Italians (but not all at the same time). Initially resisting the American and British invaders, the French see things differently after the Germans toss aside the German-French Armistice of 1940 and occupy all of France. The French - including troops from Morocco, Algeria and Tunisia – then fight against the Germans and Italians, providing a major component of the British First Army in northern Tunisia.

La Campagne de Tunisie includes 88 new playing pieces with some additional units for the German, American, British and Italian armies, but mostly the eclectic troops and weapons of the Army of Africa. There are Moroccan Goumiers, tough mountain tribesmen from Morocco who love to fight but are just as interested in looting. Camel cavalry, Obsolescent limited-production French tanks, and for the first time in Panzer Grenadier, the French Foreign Legion. Plus you get a set of 12 scenarios.