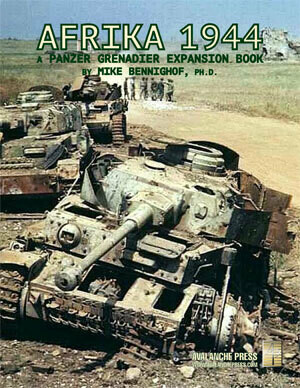 Shattered in the Battle of Alamein in late 1942, Germany's once-formidable Afrika Korps stumbled back from Egypt across Libya, to meet its end in Tunisia. Axis and Allied armies had surged back and forth across the Western Desert for just over two years, each time managing to recover from defeat and eventually stage a counter-offensive.

Panzer Grenadier fan Brian McCue asked, could the stalemate have continued? And now we've answered with this 24-scenario supplement for the Panzer Grenadier series, complete with 130 playing pieces. Certainly each side had difficulty bringing sufficient force to bear, and both German and Italian leaders thought they could continue the war in the western desert after Alamein. Significant events would have to take place in other theaters of war to allow the Italian Navy to maintain supply lines across the Mediterranean and prevent the United States from bringing its massive resources to bear. But now you can answer Brian McCue's question yourself.

Afrika 1944 is a supplement for the Panzer Grenadier system based on the potential battles of such a campaign. This module is not playable by itself, but requires ownership of our An Army at Dawn, Elsenborn Ridge and Liberation 1944, Africa Orientale Italiana, Saipan 1944 games and the Spearhead Division book. There are 24 all-new scenarios included.

There are 88 new German pieces in the desert scheme, originally included in our long out-of-print DAK ’44. They include Tiger, Tiger II and Panther tanks, Hetzer tank destroyers, Wespe self-propelled artillery plus the anti-tank guns, mortars and rocket launchers of Germany's 1944 arsenal. Plus 42 more giving the Royal Italian Army modern, German-designed tanks. The scenarios are completely new, organized in our story-arc format with two battle games to link them together.