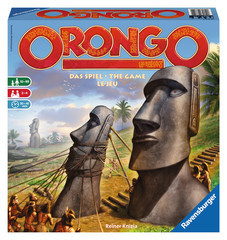 Bid and build your way to a win in Orongo, the ceremonial site on famed Easter Island! Bid the most shells to capture the best building sites and resources—then race to construct the mysterious stone statues. Pay homage to the gods at the ceremonial grounds and they just might help you! .