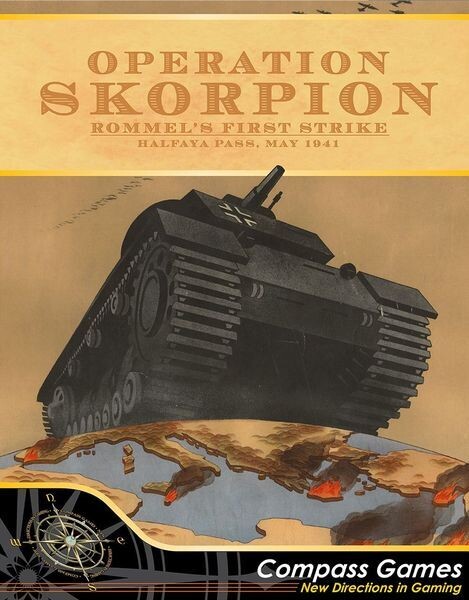 Battleground, North Africa, 26 May, 1941 – The recent Allied attack to relieve the Tobruk garrison, "Operation Brevity," had been largely a failure. However, it left them in possession of the strategically important Halfaya Pass, the gateway to Egypt. In addition, British forces were harassing the German defenders with mobile columns to the South. German General Rommel recognized the need to recapture this terrain in order to stabilize the front. Still fearing the British infantry tank, Matilda, an under gunned, ponderous, mobile fortification, Rommel launched three panzer battalions plus supporting units to sweep the British from the field. The offensive was code named, "Unternehmen Skorpion," ultimately known to the Allies as Operation Skorpion. The battle was brief and violent. Although there was a significant disparity in firepower, the Germans had a definite Achilles heel. Can the Germans accomplish their goals of capturing the Halfaya Pass and clearing its southern approaches before their supplies are exhausted, particularly the remainder of their fuel allotment?

Operation Skorpion is a relatively short, fast moving game that introduces a new fog of war game system. Opposing strength is unknown until units enter combat. Once revealed, those combat values can continue to fluctuate during the course of the game based on judicious use of mobile supply units, which can distribute and absorb Allocation Points. Although fighting a defensive battle, the British Player is not without counterattack capability. He will find his artillery arm, both direct and indirect fire, to be a potent force. Game rules such as: Combined Arms, HQ Coordinated Combat, Road Overrun, Engineers, and Reconnaissance Probe, all contribute to an appropriate sense of realism. Operation Skorpion provides exciting, tense, and balanced game play. Determining the ultimate winner often occurs on the last or next-to-the last game-turn. Turn back the clock to the heady days of Spring 1941 and command the Afrika Korps, or take on the British and ultimately break the sword of the Desert Fox, himself, in this battle game by Compass Games.