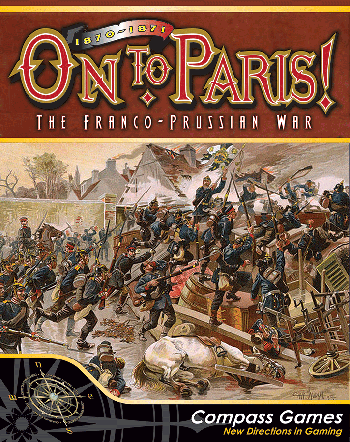 On To Paris! uses a wargame system adapted from Victory Games' “The Civil War” to simulate the grand events of the Franco Prussian war (1870-71) and challenge players to control the leadership, organization and military operations of Armies and Corps during the later 19th century.

The Franco Prussian war was fought using Napoleonic tactics but with weapons of almost World War One lethality that included breech loading rifles, artillery and an early version of the machine gun. The Franco Prussian war developed many key concepts for the control and movement of large formations in warfare as well as tactical combat.

At a time when the French army was considered the best in the world, the armies of Prussia and her German allies invaded France and in less than 3 months defeated the armies of Napoleon III. Despite German success, the French refused to surrender and as a result German forces laid siege to the French capital. For 5 long months, Paris, a city of about 2 million inhabitants, was starved into submission while surrounded by German armies that had to maintain a long supply line back to Germany, all the time fending off desperate French attempts to break the siege.

On To Paris! simulates both phases of the Franco Prussian war; the German invasion of France in 1870 and the German conquest of France in 1871. Designed for two players, On To Paris! is also suitable for solitaire play. Nine scenarios include an ‘early start’ plus a full length campaign game. Players can also pick any scenario as a starting point and determine their own period of the conflict to simulate.

On To Paris! is a fast moving competitive one map game where players do their best to control their forces and where every decision creates excitement and tension. The game system features interactive game play with flexible initiative and variable turn length as well as extensive defensive player reaction ability. The game puts players in charge of all the famous Corps and Army leaders of the Franco Prussian war which are all rated for their individual leadership qualities and occasional unique characteristics like resistance to following orders.

Before it ended, the Franco Prussian war caused an overall casualty rate over twice that of the American Civil War fought only 5 years earlier and it was the last war where both armies wore uniforms designed for the parade ground. Special rules include the evolution of German Infantry and French Artillery tactics throughout the war, the political stability of the French 2nd Empire, Franc Tireurs, the brilliance of von Moltke and the German General staff, cavalry, German Landwehr and French Mobiles, Fortresses, Forts, siege artillery, rail supply and more.

On To Paris! is a straightforward, intricate and interactive fast playing game that covers the entire Franco Prussian war with Individual Army and Corps level Leaders that are rated for their tactical and battle leadership abilities and to react to enemy forces. The game focuses on the operation of Corps and Armies and individual strength points that represent brigades and the abilities of the Leaders that command them. Players decide where to focus their operations then alternate commanding their units in a series of game phases. Each phase, the amount of initiative represents the relative ability of each player to conduct operations. Commands to units expend different amounts of available command and initiative and Corps and Armies let you organize and move larger number of strength points more efficiently. The more initiative you have, the more you can do. But remember, the other player is able to react with their forces and will be able to move second while you react to them! A simple combat and siege process, rail/sea transport and supply rules and many optional rules create in depth historical flavour of the Franco Prussian war and significant replayability.