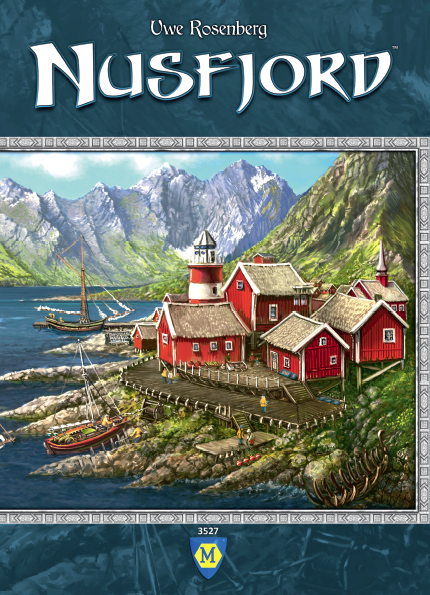 Nusfjord is a tranquil fishing village in Lofoten, an island chain in northern Norway. Fifty years ago, the hustle and bustle prevailed when the cod was spawned. Today the place counts no more 100 inhabitants and presents itself as a museum village. When you realize that you are paying for just being able to see the houses, you can imagine how beautifully picturesque it is here. Cruise ships sail along the coasts of the long-drawn, today largely abandoned island world.

In the time in which this game plays, it was still different. Sailing ships dominated the fjord. The rocks around Nusfjord were still overgrown. The wood went, the beauty of the landscape remained. We hope to catch you with this game.

Waves splashing on the beach, gulls arguing high in the air, and a stiff breeze blowing over the rugged landscape; the thatched houses in their colorful colors duck along the fjord on the shore to be better protected from wind and weather. Here, at the so-called Nusfjord, in the middle of the beautiful, but merciless nature of Norway, you have settled your fishing company, because the fishing grounds are plentiful and productive. However, you are not the only one with this project. Fishing has a long tradition in this region and therefore the competition is great. But who is allowed to live in such a place has already won ... or not?

Nusfjord by Uwe Rosenberg puts the players in the beautiful landscape of Lofoten. In these northern climes, it is important to lead your own fishing company to success. To do this, the fleet must be enlarged, the forest cleared, new buildings built and the local elders satisfied. But the competition does not sleep! Those who need quick money can offer their shares for sale, but there is a risk that he must participate in the buyer's catch.

Already known from titles such as Agricola or Ora et Labora also has in Nusfjord the worker placement mechanism plays a central role. So each player has from the beginning of three workers, which he uses in turn alternately with the other players on the central board to trigger certain actions. Whether a forest is cleared on its own tableau, a new cutter is to be purchased or another building is to be built, a worker must first be placed on the appropriate field. Of course, this is only possible if there is still room for this worker on the action field. In this way, players are expanding their fishing fleet, building conspicuous buildings and enlisting the elders of the village to head the local fishing industry.

Two new features make for a varied game feeling. So the money is sown as always rare and one of the quicker and easier ways to get it is to throw shares of its own company on the market. This risky game can pay off for you, because if you succeed in repurchasing these shares yourself, you have usually gained money and you have incurred no disadvantages. If, however, an opponent acquires these shares, it is now considered that you must take part in your hard earned catches. And where are we talking about your claws? Since you live in a traditional fishing region, the distribution is just that not so easy to manage. Because even if you like The elders of the village can support them with personal fields of action, so in return they want to be involved in your fish. Thus, it can happen (even if you try to avoid this) that your entire catch is hanging from the competition and your elders involved, leaving your warehouse empty.