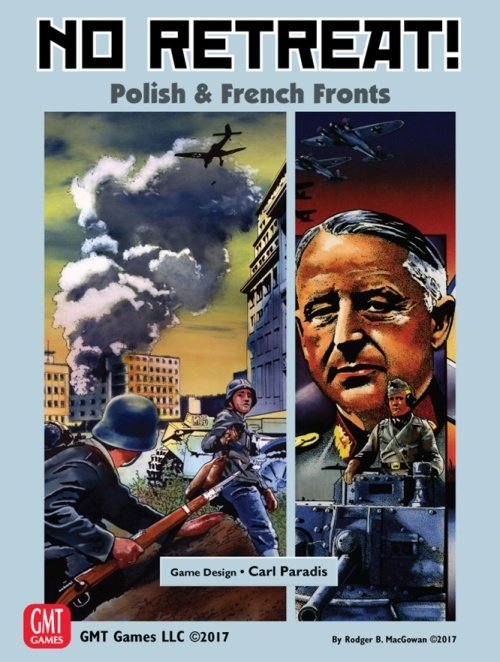 No Retreat! The French and Polish Fronts

The “Phony War” ended in May of 1940 as the German Army unleashed blitzkrieg attacks into Holland, Belgium and Luxembourg in preparation for their audacious plan to invade France. Dubbed “Case Yellow” (Fall Gelb), it relied on a surprise attack with armored forces through the Ardennes Forest that the French had deemed impenetrable. A German staff study proved otherwise, and their panzers were pushed through this broken wooded terrain with deft speed, catching the Allies by surprise with their appearance.

In No Retreat 3, players command the Allied (French and British) or German forces, operating them in accordance to one of several historical plans (represented by Plan cards). Maneuvering forces over hexes that are approximately 30 kilometers across, over turns that represent 4 days of real time each, the vaunted No Retreat series card-assisted game systems are there to create on-map puzzles around each hex, unit and battle as the tense engagements rage back-and-forth and nothing is entirely predictable.

Designer Carl Paradis has made an exhaustive study to answer the question, “Could France have staved off total defeat in 1940?” His research yields a resounding, “Yes!,” and the simulation elements of No Retreat 3, combined with its novel gameplay elements, offer a rich and insightful presentation of this controversial military campaign that shaped the trajectory of World War II.

But wait, there is more! For this deluxe edition, complete with a 2-sided mounted map and oversized counters, the 1939 Polish Campaign was also added.

This little-simulated battle will see many new concepts implemented into the “No Retreat!” game system. Given that both sides had never seen battle before and the units were mostly untried and green, a “Fog of War” game system is in use, adding much replayability to this simulation. Since that this game is fast, a complete contest will consist of two plays, with each gamer taking both sides in turn, trying to best the opponent’s performance. Some intriguing “what if” hypothetical historical options are also added: Could have France intervened more effectively, the USSR acted differently? What if Czechoslovakia was never taken over by the Nazis? Poland better prepared? All these and more are yours to try out. No Retreat!

Regular Game: The May/June 1940 campaign, but with an added twist. Both players will draw/choose a “Campaign Plan Card” that will instruct them as to their general objectives. There are over 6 different cards from each side, all taken from actual historical plans; the success of which will add critical Victory Points if the game does not end in “Sudden death”. What if Hitler had attacked in winter 1939 like initially planned? Or the French Air Force had been better prepared?

Historical Game:The May/June 1940 campaign, but with the Plan choices limited to the more historically plausible alternatives.

Simulation Game: Both sides will be given the plans/set-up used during the actual campaign. Fall Gelb no5 for the Germans, Plan Dyle A or B for the French. The game also starting with the offensive already underway, Liege taken and Holland invaded.

Operation Dynamo: In this scenario the German “Sickle cut” maneuverer towards the sea is almost completed! As the Allies, will you be able to save the British expeditionary Corps, evacuating it at Dunkirk, or even better, pierce the enemy lines and re-join the main French Army down south?

Regular Game: The September 1939 campaign, but with extra choices. Both players will secretly deploy most of their troops on smaller strategic maps. One side or the other could have some extra “initiative” choices for the deployment of their troops.

Historical Game:The September 1939 campaign, with the exact historical set-ups of both forces. For this contest the players will take each side in turns. So the scenario will be played two times.

Alternative History game: Players will explore many “what-if” alternatives. Some randomly determined, some planned by choice. That scenario will be linked to the French Front game and its outcome can affect the set-up of the latter.