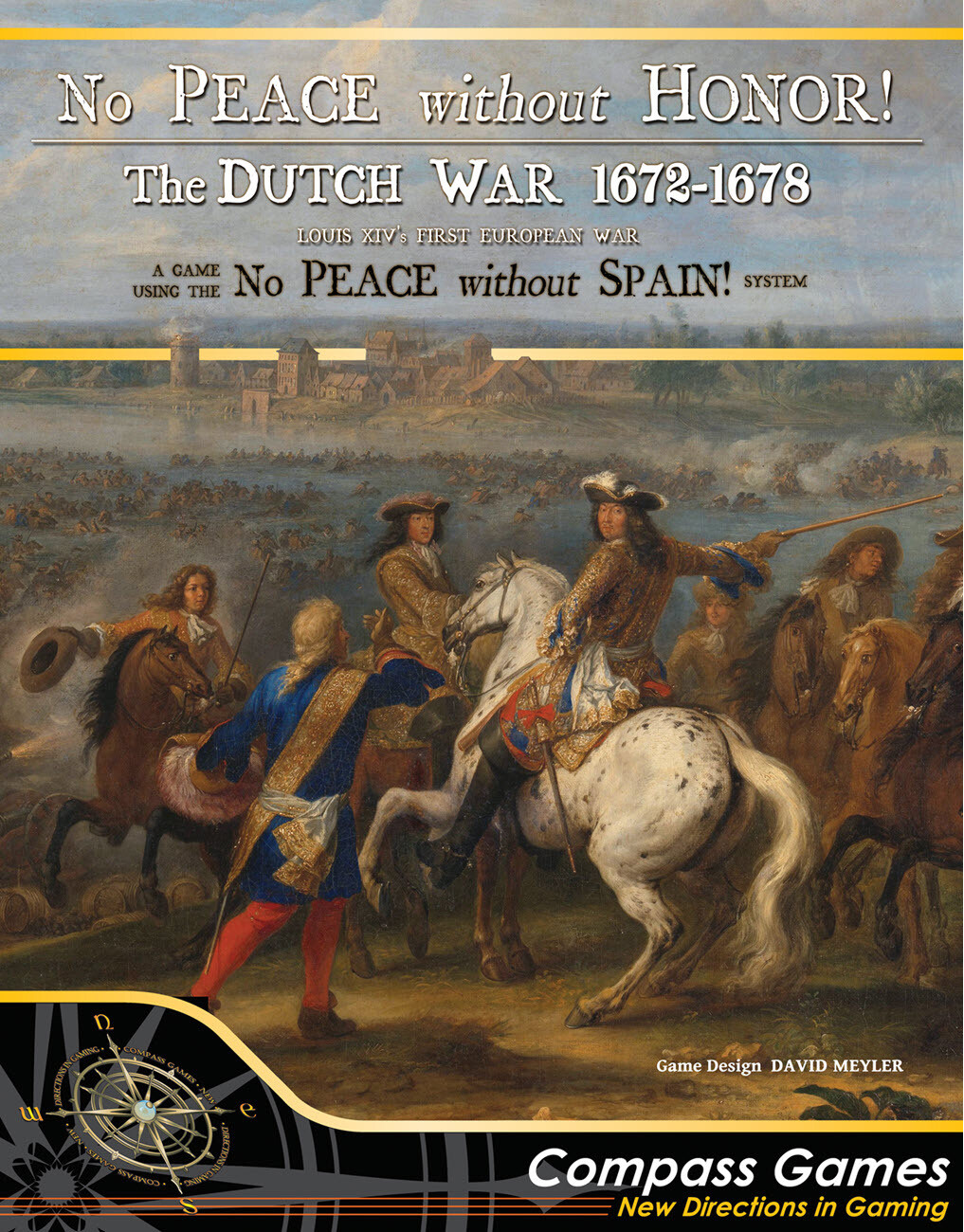 No Peace Without Honor (NPWH) is a two-player game depicting Louis XIV’s earliest European wars, the War of Devolution 1667-68, the Dutch War 1672-78 and the War of the Réunions 1679-1684. This stand alone game uses the No Peace Without Spain System. The focus is on Louis’ carefully planned invasion of the Dutch Republic, which was foreseen as a short, sharp conflict, similar to the War of Devolution. However, the conflict unexpectedly became a pan-European conflagration for which none of the participants were prepared. This game, through the War of the Réunions option, can be linked to Nine Years War and No Peace Without Spain to play out the entire 46-year span of the wars of Louis XIV as a grand campaign game.

In 1668, Louis XIV made a quick land grab at the expense of the Spanish Habsburgs. But at the ensuing peace talks, Louis had accepted what he saw as humiliating terms. Although he kept the fortress city of Lille in Flanders, he had to relinquish his other conquests. The Dutch Republic played a key role in curbing Louis’ expansionist plans, and he never forgave what he saw as a betrayal by an erstwhile ally. His plans of revenge came to fruition in 1672. By secret treaties, he detached the Republic’s allies, Sweden and England. While England would launch an invasion from the sea with the combined Anglo-French fleets, Louis himself would lead the main invasion, famously crossing the Rhine at the Dutch frontier at Lobith. But, instead of a short, limited war, Louis’ adventure would lead to a European conflagration lasting almost five decades.

This stand alone game uses the No Peace Without Spain System. A new countersheet provides additional leaders, such as the young Prince William of Orange, or the skilled Bourbon veterans Turenne and Condé. The Sun King himself, Louis XIV, can make an appearance. A new set of event cards features incidents such as the Ottoman threat to Austria, colonial wars and the Anglo-Dutch naval war. Players must not only battle each other, but also deal with increasing war weariness among their respective populations which can trigger more political and economic events, and eventually force you to the peace table whether you are ready or not.

Can Louis XIV conquer the Dutch Republic in one swift campaign? Or will the French armies become literally bogged down in front of the Dutch Water Line defenses? Can the young Prince of Orange rally his people and forge a lasting coalition against his Bourbon foes?

While this is a complete game on its own, combined with Nine Years War and No Peace Without Spain, players can refight the entire wars of Louis XIV in one grand campaign from 1668 to 1713.

Time - One year per turn