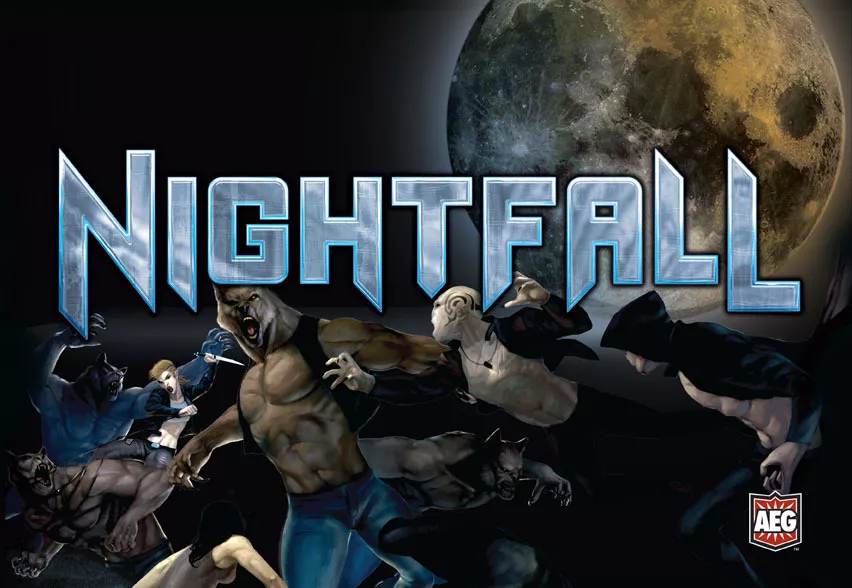 Nightfall is a new fast, furious and fun deck-building game from Alderac Entertainment Group. Featuring direct head-to-head combat, amazing art, a new AEG world, and unique mechanics by designer David Gregg, Nightfall will be the deck-building game to own.

Before the game begins, there is a draft to determine which cards are available for purchase, and by whom. During this draft players select two cards from the set for their personal archives, and they also select cards to put into the common area. The cards drafted into personal archives may only be purchased by the player who drafted them. After the table has been set with the private and common cards, players begin play.

The meat of Nightfall is in the chaining mechanic. Each card has a main color and two linking colors. If you can match the main color of a card to one of the linking colors of a previous card, then you can chain those cards together. Once a chain is started, players all get an opportunity to link additional cards onto the chain during that turn. Cards in the chain then resolve in reverse order: first in, last out. Instant effects fire off as cards come off the chain, doing damage to your opponents or bringing characters into play to defend you and attack your opponents.

The object of Nightfall is to put wounds into your opponent's decks and end the game with the least amount of wounds in your deck. But beware: the more wounds a person has, the more enraged they become and the faster their deck works, which means more cards and bigger chains coming your way! Nightfall's base set releases with starting decks of 12 cards for up to 5 players, and 24 distinct cards (7 copies of each) for drafting during play.

The box contains card dividers, and is in the same format as the much heralded Wrath of the Elements box for Thunderstone.