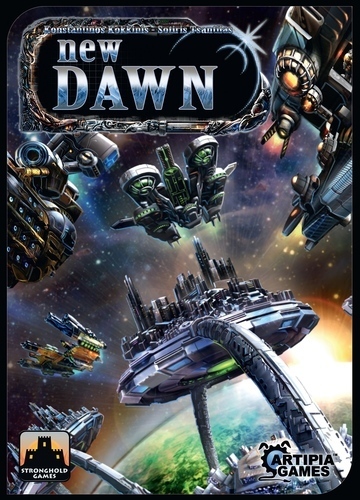 New Dawn (An "Among the Stars" universe game)

SKU SHG-8017
$48.95
In stock
1
Product Details
New Dawn is a thematic sequel to Among the Stars and part of the Among the Stars Universe series. It is not an expansion. It is not a card-drafting game. It is an entirely new game with great player interaction and conflict, as each player vies for control of a galactic sector.
And the story continues... Twenty years after the Alliance was formed, the cost of constructing new space stations is becoming unbearable. In order to improve the economy, the Alliance has decided to rebuild and recolonize some of the planets and space facilities who were abandoned during the war. By activating them once more, the Alliance is hoping to acquire the much needed funds and resources.

In New Dawn – a new game in the Among the Stars Universe of games – players take the role of Alliance officials. Their assignment is to explore and revive a galactic sector. By developing various technologies and dispatching ambassadors, each player has the chance to visit abandoned planets, military facilities and space stations and establish bases to maintain control. Competition is fierce, and each mistake in maintaining control can cost dearly.