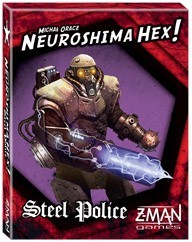 The Steel Police are a wandering brigade of fanatics who want to ensure that the law is respected. They are equipped with a new experimental power armor. This armor is equipped with many cybernetic enhancements that increase the organism’s abilities, but at what cost ? Steel Police officers will automatically repond to anything they consider a threat. They often appear out of nowhere and try to restore order in the middle of a battlefield. They are rutheless in their application of the law and many year for the days where chaos and anarchy ruled…

The Steel Police army introduces a new ability : Reflection. This ability protects army units from all form of attacks directed at it’s side marked with the Reflection icon. A such attack will instead reflect back on the attacking unit.

Contents:
Save this product for later