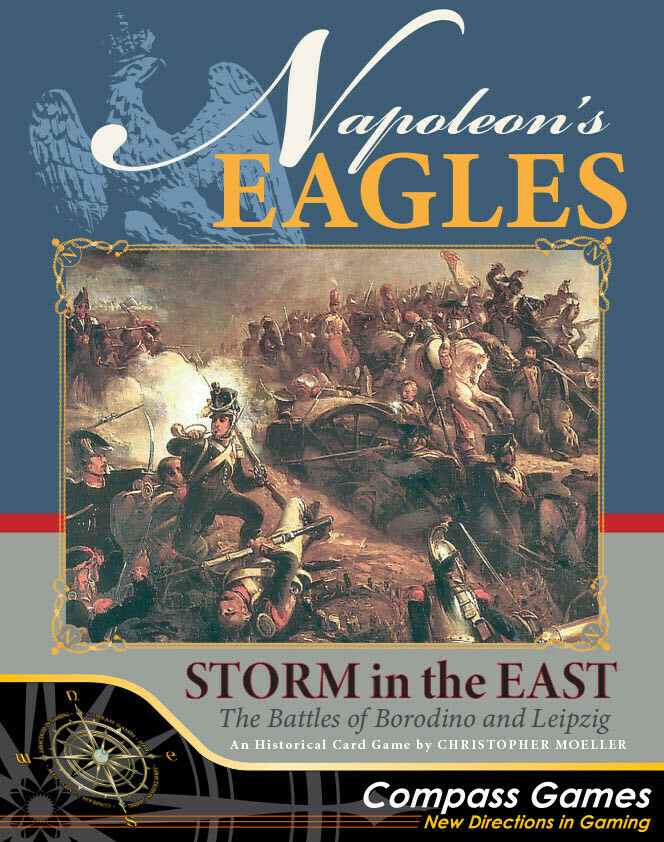 Napoleon's Eagles: Storm in the East

The Battle of Borodino and Leipzig

The events of autumn 1812 to autumn 1813 marked a pivot point in the history of 19th Century Europe. Despite ominous setbacks in Spain, Napoleonic France before 1812 was at the height of its expansion. The continental system was holding, if imperfectly. Monarchs friendly to the Empire (several, members of Napoleon’s immediate family) ruled in every capital of the continent. Only Britain remained unbowed. By the end of 1813 the story had changed dramatically…

Napoleon’s Eagles is a highly playable, action-packed card game set during the wars of 19th Century Europe. Two battles are featured: Borodino, the sanguinary clash before the gates of Moscow featured in Tolstoy’s famous novel War and Peace, and Leipzig, the great “Battle of Nations” which marked the beginning of the end of the French Empire.

Two smaller battles are included (Shevardino and Lieberwolkwitz), as well as two campaign games that cover multiple days of battle: September 5th-7th, 1812 at Borodino and October 14th-18th, 1813 at Leipzig. The game includes rules for cavalry charges, artillery bombardment, army morale and army commanders. Emphasis is placed on the role of reserves and the judicial commitment of infantry and cavalry. Key terrain pieces are featured, such as the city of Leipzig and the famous Great Redoubt at Borodino.

Time: abstract (one full day of battle is 6 turns)