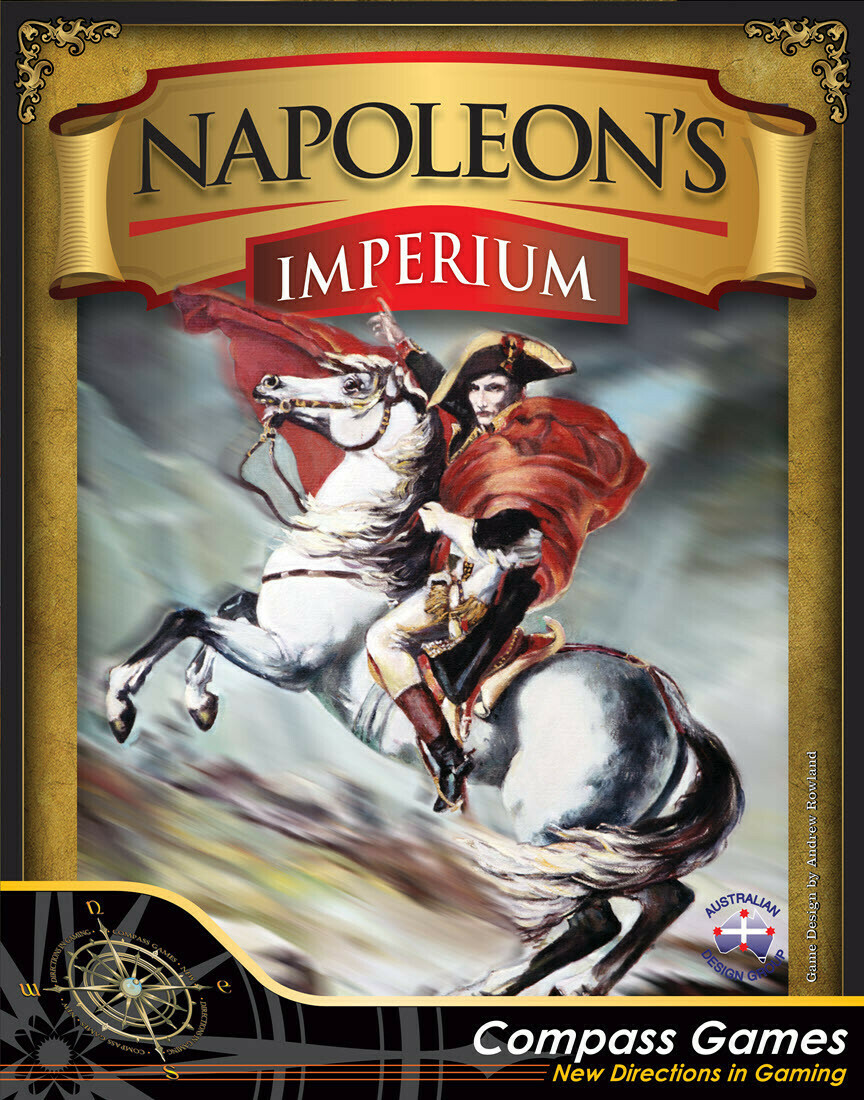 Napoleon’s Imperium is a magnificently designed team-based wargame fought out on an epic scale, set in the glorious Napoleonic Wars!

Allowing up to eight players, each player can command one or several Empires in a Two Alliance Battle for Europe.

All Empires have different strengths and weaknesses, different economic scales, and geographic advantages. As no two Empires are alike and can be played in so many ways, no two games are the same. Survival and dominance in Napoleon’s Imperium are dependent on solid player partnerships!

But although each Empire in the Alliances is vastly different, the two opposing Alliances are balanced equally. The slight imbalance of commencement strength is offset by the combination of an Empire’s unique abilities together with their geographic advantage or disadvantage.

The upheaval of changing alliances, the ramifications of treaties and the significance of world events are all represented in Napoleon’s Imperium via 160 beautifully designed “Battle Cards.” These Battle Cards balance history and real-world events with the element of chance and fog of war.

In Napoleon’s Imperium optional rules, the role of weather adds an exciting factor, affecting the movement and the attack and defense abilities of each Empire.

It’s big, it’s bright, it’s attractive and interactive. But most of all, it’s addictive; bringing a new experience every time you play.

And with Napoleon’s Imperium, the more you play, the more your prestige grows as you earn ranking points with every game! Ranking charts are located within the rule book for personal and online rank tracking.

The game designer is from Australia, so don’t be surprised if you see a rare cameo of little-known Napoleonic connections to Australia in the gameplay!

Napoleon’s Imperium represents over 29 years of design development and game testing and is modelled on an award-winning prestige tabletop game that has featured in Australian media, exhibitions and used for many years as a corporate training aid for team building and strategic planning.

And there is more to come in the future with each of the Seven Coalitions being developed as new Alliance sets that can be added to this base game as future add-ons.

Each Turn has 3 phases:

A wonderful optional element of Napoleon’s Imperium is the roll for weather each year. This has individual effects on each player and can lay waste the best of plans or save an Empire from imminent destruction!

The objective of Napoleon’s Imperium is for one Alliance to conquer the other by either achieving a Capital Victory (capturing key enemy territories) or a Battle Points Victory (based on favorable outcomes and achievements made during game play).

4-6 hours for Battle Point Game, 6-15 hours for Campaign Game depending upon skill of players. Each year of play takes approximately 40 minutes to one hour to complete.