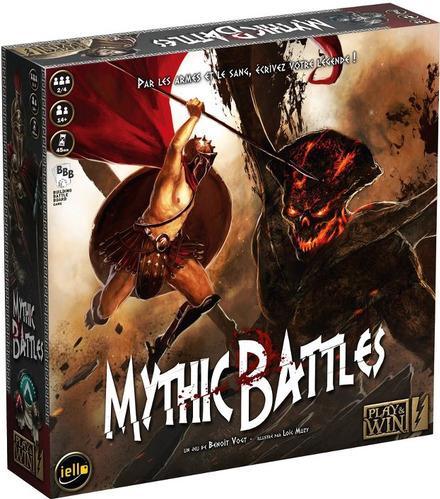 Mythic Greece is in chaos: Athena and Hades are at war and have sent their greatest heroes to battle. Take on the role of these generals out of legend, leading fantastic armies and lead your troops to victory!

Mythic Battles is a game which simulates epic confrontations and battles that will take your breath away. Thanks to its innovative system – the Building Battle Board (BBB), which combines game mechanisms from miniature games, board games and card games – Mythic Battles offers you an experience the likes of which you have never seen. Recruit your army, play your cards to activate your units, roll your dice to resolve combat – reinvent your way of playing!

This box contains two complete armies to play with two or four players, an initiation campaign, as well as all that's required to play as you wish. Other armies and units will periodically be released to flesh out your campaigns.

Write your legend in the blood of the fallen!

Free Scenarios from iello can be found at iello's Mythic Battles webpage.