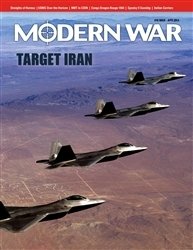 Target Iran is a solitaire simulation of a hypothetical US-Coalition-Israeli attack on Iran to destroy weapons of mass destruction (WMD) and other critical targets. The game begins with a "strategic" phase wherein the player conducts reconnaissance, cyberwar and mobilization (the purchasing of assets) for the actual attack, and then an "operational" stage, which is when your attack is actually executed.