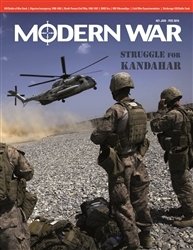 Kandahar: Special Forces in Afghanistan (Solitaire) gives you command of a Special Forces team in Afghanistan from 2003 to 2013. Your lead your men on a variety of randomly generated missions; you choose your weapons and equipment, decide on how to posture your team, and plan your approach and method of extraction.

You must choose weapons and equipment that don’t run the risk of quickly exposing your team, and don’t cause unintended escalation. (If the US military must divert regular combat units to your area to quell enemy activity, the value of the Green Berets will be called into question by the traditionalists at the Pentagon.) Your goal is to disrupt the enemy’s freedom of action in your area of operations while creating only a minimal footprint at minimal cost.

Kandahar is a solitaire game in which you assume the role of a Special Forces colonel. The system will generate missions and enemy responses to your unit’s activities.

Each hex on the map represents 200 meters from side to opposite side. Each turn represents anything from hours to days, depending on the tempo of your activities.