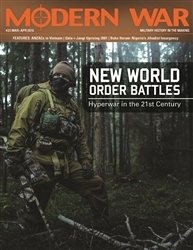 New World Order: Analysis of conflicts that may occur in the future with the current state of affairs.

New World Order Battles is a grand tactical wargame of battles that were, or could possibly be fought, in the era since the fall of the Berlin Wall, and even into the near future. Players control actual and hypothetical combat units using a wide range of technologies and forces to gain objectives. Two scenarios are included: Kiev, covering a hypothetical Russian clash with NATO forces at the Ukrainian capital, and Ulaan Baatar, a hypothetical clash between Russian and Chinese forces at the Mongolian capital.

There are two players in each game, commanding opposing forces. Both games use a system of shared rules, and each also has its own scenario special instructions. The game pieces represent military units, supporting firepower, and Netwar operations.