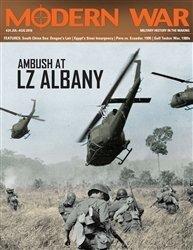 Ambush at LZ Albany: The Ia Drang Valley saw the first major engagement between American and North Vietnamese troops in the Vietnam War. After the stoic defense of LZ X-Ray, the troops from 2-7 Cavalry found themselves in a desperate fight for survival after being ambushed at LZ Albany.

Ambush at LZ Albany depicts the ambush of US air cavalry units by the North Vietnamese Army on 17 November 1965, during the Pleiku Campaign. Turns cover one hour, with multiple impulses driven by a random chit draw. Additional chits add extra assets like artillery and air power. US and NVA platoons maneuver through areas of jungle, sawgrass, and clearings. Leaders magnify unit abilities but are vulnerable. The NVA player is bent on maximizing US losses before being overwhelmed by firepower. The US player must stabilize the situation, maximize NVA casualties, and evacuate wounded to prevent their falling into enemy hands.