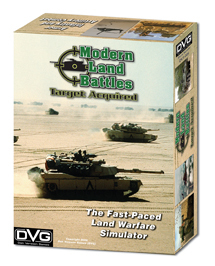 The game system maximizes player decision making to make every turn exciting. At the start of the game, you get to select a nation's ground forces to command. Then, you get to select the specific armor, infantry, and artillery forces that you think is the best battle force. Once selected, you'll get to battle the forces selected by the other players in order to capture and secure vital objectives!

Components:
Save this product for later
Display prices in: USD
1-513-201-7672
mrb.rockinbgames@gmail.com
www.shop.rockinbgames.com