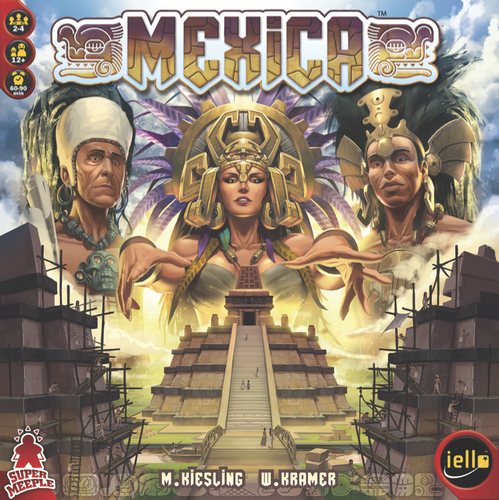 IELLO's Mexica is a historic strategy game for 2 to 4 players where everyone improves their Aztec districts to gain favor with the Emperor and become victorious.

The year is 1325, and we have just discovered the original island, as foretold in the prophecy. We will once again construct Tenochtitlan, the future Aztec capital. Each of you is a Pilli Mexica, a great noble. To make yourself even more indispensable for the sovereign, construct canals to carve out districts (calpulli) of specific sizes, as commanded by the Emperor. Travel to these districts to found them officially before anyone else does. Construct bridges across these canals, to connect districts together. Travel by foot (entirely on land, or by passing over these bridges) or by boat (navigating from one bridge to another). Build temples in the districts, so that the sum of their levels is greater than any other player’s. This way, you demonstrate your spiritual supremacy and gain favor with the Emperor.

By creating, and then founding districts, and by the predominance of your temples in each of them, you earn prestige points, recorded on the track that wraps around the outside of the gameboard. Whoever is ahead at the end of the game will be declared the winner, and called to a higher office at the Emperor’s side.