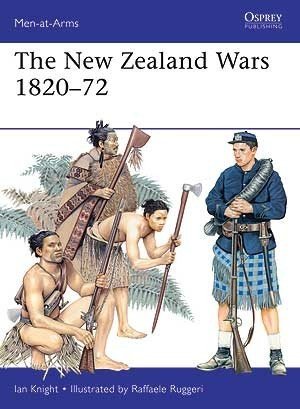 Between 1845 and 1872, various groups of Maori were involved in a series of wars of resistance against British settlers. The Maori had a fierce and long-established warrior tradition and subduing them took a lengthy British Army commitment, only surpassed in the Victorian period by that on the North-West Frontier of India. Warfare had been endemic in pre-colonial New Zealand and Maori groups maintained fortified villages or pas. The small early British coastal settlements were tolerated, and in the 1820s a chief named Hongi Hika travelled to Britain with a missionary and returned laden with gifts. He promptly exchanged these for muskets, and began an aggressive 15-year expansion. By the 1860s many Maori had acquired firearms and had perfected their bush-warfare tactics. In the last phase of the wars a religious movement, Pai Maarire (‘Hau Hau'), inspired remarkable guerrilla leaders such as Te Kooti Arikirangi to renewed resistance. This final phase saw a reduction in British Army forces. European victory was not total, but led to a negotiated peace that preserved some of the Maori people's territories and freedoms.