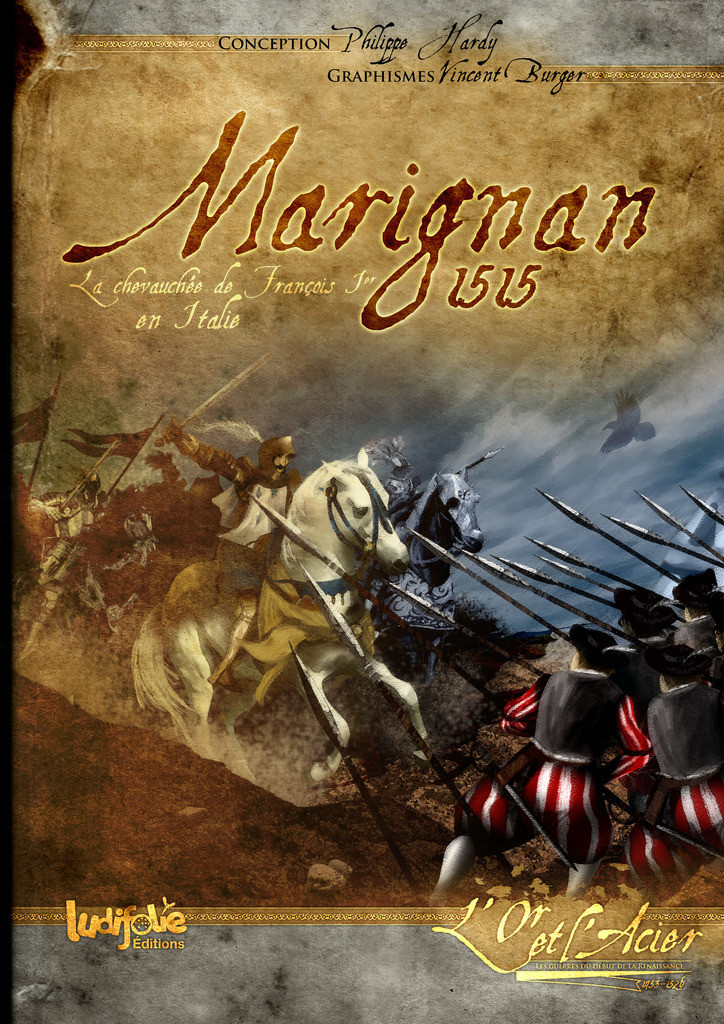 Marignan 1515 - The Ride of Francois I in Italy

Marignan 1515: la chevauchée de François Ier en Italie (Marignan 1515: the ride of Francis I in Italy) is the new opus of the “Gold & Steel” series started with Les guerres de Bourgogne (Wars of Burgundy).
This is an historical simulation of the 5th War of Italy - July 1515 to February 1517 – featuring Marignano battle: a French victory that shapes the relationships with the Swiss confederacy for centuries in ending their supremacy on battlefields and will reach this year its 500th anniversary

One player leads the French armies and their allies (Republics of Venetia and Genoa and the other one is in command of the Swiss Confederacy and its allies – the Holly League - (Papal states, Duchy of Milano, Holly Roman Empire, Kingdom of Naples). The goal of both of them is to take control of the Duchy of Milano and Venetian territories hold by the Empire, win pitched battles or major sieges, and neutralize the opponent's allies.

One key element of the game is collecting enough resource each turn (the gold) to pay all the mercenaries troops (the steel); German landsknechts and Swiss soldiers. Otherwise they will quit the battlefield… The money can be used to neutralize enemy allies as well.

This is both a strategic & tactical game with armies and garrisons evolving on the main strategic map representing Northern and Middle Italy and units fighting on a tactical map featuring a typical XVIth century battleground. Units are men-at-arms, pikemen, crossbowmen, halberdiers, harquebusiers, swords & bucklers, jinetes and stradiots (both light cavalrymen) pioneers, cannons, from 1,500 to 2,000 men at full strength, 750 to 1,000 horsemen or 100 cannons of all calibres. The specifics fighting elements of that period are added with tactical chits (rolling shots, infantry or cavalry charges, harassment, ditch, fence, clash of pikes, feint, hedgehog, cannon battery, etc.), arms combination – early Tercios - and events such as rain, snow, minor ally no fight or betrayal, no wing deployment, no money no mercenaries, Alle Freunde (all friends). Optional rule includes a hidden crossing of the Alps Mountains.

The complete sequence of a turn:

I/ Kingdom of France