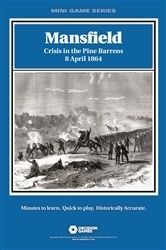 Mansfield: Crisis in the Pine Barrens

In early 1864, Union Gen. Nathaniel Banks led a small army up Louisiana's Red River. His objective, in conjunction with an overland campaign through Arkansas, was the Confederate Trans-Mississippi capital at Shreveport. Poor coordination of the two columns enabled the Confederates to concentrate their slender resources against each in turn. Banks was first, and in early April his spearhead was hit near the crossroads of Mansfield. Historically, the Union forces, strung out on the march, were routed piecemeal, but the battle could have gone the other way.

Mansfield uses the simplified Quick Play version of the Musket & Saber system of warfare during the muzzle-loading era. Combat is based on unit quality rather than raw numbers, and rewards use of historical tactics. All units are susceptible to rout when weakened, so players must maintain reserves. Leaders enhance unit capabilities. Winning the battle depends on deployment, thoughtful maneuver to concentrate at the key points, the proper coordination of arms, careful use of leaders and special units, and an understanding of the strengths and weaknesses of each army.