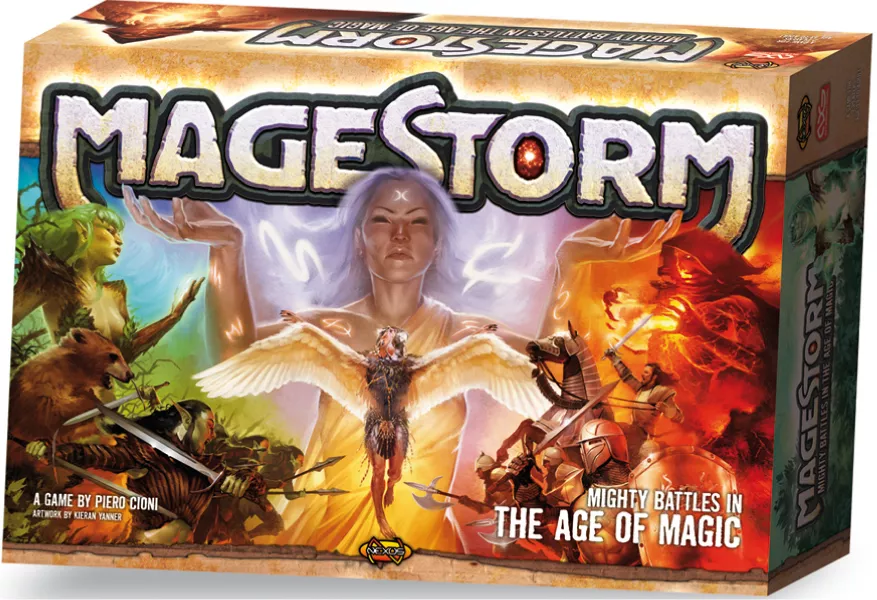 Mighty armies fight in the battlefield supported by powerful mages, in a game with innovative and easy-to-learn mechanics.

Magestorm is a new board game series where magic is at the center of the stage in a fantasy battle. It was created by Piero Cioni and published by the Italian company Nexus Games, the creators of War of the Ring, Wings of War, and Battles of Napoleon. In Magestorm, players control both an army and a mage—an ultra-powerful being who will rule the battles with his abilities and spells.

The game is set in Aleen, the world of the Two Suns, where the forces of magic flow across the land and the seas, penetrating deeply under the mountains and hovering up over the winds. After millennia living in the Western Continent, the humans come back to Tys, the Old Continent, from across the Deep Sea, leaving their lands destroyed by a long and raging war... and a new, fierce war is about to start.

The battles among the different factions are fought under the shadow of mighty wizards who help their mortal allies with their incredible powers and spells while trying to achieve their personal goals. The powers of each mage are very different, and by choosing a different mage to support an army, the game experience changes completely.

Magestorm is a scenario-based game. Each scenario is inspired by events from the fictional history of the world of Aleen and describes the setting of the battle, the composition of the armies, the mages used, and the duration of the game. Victory conditions may be very different from one scenario to another: conquering a number of objectives, passing through the opponent’s army with the minimum number of casualties, escorting a caravan through the battlefield, and so on.

The game is characterized by easy-to-learn game mechanics. Each player will be commanding his troops and casting his spells to help them during the battle. The armies are divided into units, composed by troops, represented on the battlefield by plastic figures mounted on special bases. Their characteristics and abilities are shown on troop cards, through icons and values.

During the game, in the role of the mage, each player will cast spells using a special mage board, that keeps track of the magical powers available to the mage. Every round a mage will have new magic energy at his disposal, represented by new power point tokens placed on the mage board, that he will be able to use later to cast his spells. Every mage has his personal path to magic and in the game this aspect is reflected by the structure of the mage board, which allows the mage/player to decide how to channel his magic powers, and by the spell cards available to the mage.

The units in each army are moved using an innovative order system based on objective markers. Each player manipulates objectives on the board, marking hexes which are a target for his units. Then, the units will advance towards their closest objective. When enemy units meet, a combat occurs. All the elements which affect its outcome—troops, terrain, spells, summoned creatures—are handled in a streamlined way through special cards and a single die roll. The combat resolution is fast and bloody, so that no fight ever ends without effects on either opponent.