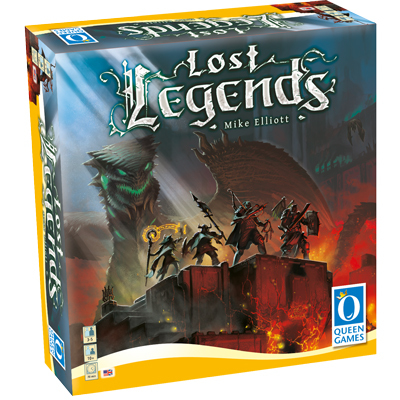 In Lost Legends 3 to 5 players are mighty warriors, developing their strengths in order to battle increasingly ferocious monsters as they quest deeper into danger.

The players choose from five unique heroes; rewarded with gold for defeating monsters they equip themselves with weapons and armour, magical scrolls and artifacts to enhance their strengths and alleviate their weaknesses. 21 different monsters stand between them and becoming legends.

The players fight their way through 3 levels, each level consists of a drafting phase and a combat phase. Each level stronger, better equipment awaits the players and they will need it, because the monsters grow stronger, too.

In the drafting phase players use their gold to buy equipment cards or turn them into skills for free, having the right skills decreases the cost of equipment cards.

In the combat phase the players use their equipment, which they hopefully have chosen carefully, to exploit the monsters’ weaknesses and defeat them unharmed. Once all monsters are vanquished or all players have been knocked out, they move on to the next level.

Only one warrior can become a legend: set your fellow players up with monsters they are not prepared to fight and don’t let them get the equipment cards they need. You might even use magic to get them into trouble.