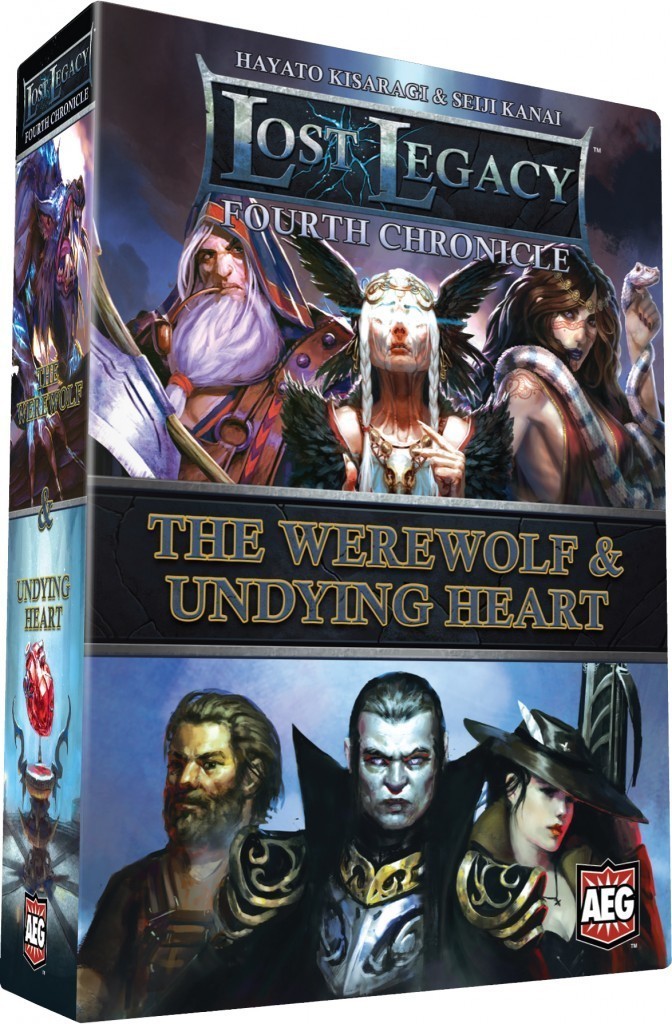 In the distant past, a starship from a faraway world appeared in the sky. Damaged in battle, the craft broke apart and traced lines of fire across the horizon. These falling stars crashed to the surface, and in the ages to come, became enshrined in legends as the Lost Legacy. Discover where the Lost Legacy can be found and win the game!

Lost Legacy: Fourth Chronicle contains two sets of game cards: The Werewolf and Undying Heart. Each set can be played independently or be mixed together with other sets to create a unique custom set. Combine all Lost Legacy sets together for the ultimate adventure!

One of the Lost Legacies—a device originally designed to save lives—crashed to the ground in the far northern forests. Damaged by the crash, this device was no longer functioning as it was intended. When a handful of injured or sick locals encountered the device, it sought to help them survive in the best way it could—by combining the makeup of their bodies with those of animals. The people affected found themselves into a hybrid of man and beast.
These unfortunate people had become werewolves, shifting between human form and that of a monster under the light of a full moon. When trapped in the werewolf state, the afflicted person is controlled by feral urges to hunt and feed. Werewolves lose the ability of higher reason, trapped by their instincts. Only in rare cases can a werewolf rise above its primal nature. Strong, swift, and lethal, werewolves are apex predators when on the hunt, and no one in the northern forests feels truly safe when the full moon rises.

Ages ago, a strange craft visited this world from beyond the skies. The craft was sundered by a mysterious tragedy, its shards falling to the ground below—scattered across the lands far and wide. On the isle of Vonrathia, one of the Lost Legacies came into the possession of Baron Von Stoke. This nobleman gained possession of the Undying Heart, transforming him into a terrifying vampire. His formerly benevolent rule has turned tyrannical, and he has the used the power of the Legacy to transform his court into blood-sucking creatures of the night.
According to legend, the Baron made an evil bargain with the Undying Heart; upon the rise of a blood-red moon, he will be granted unimaginable power over the people of Vonrathia and begin a thousand years of vampiric rule. A skilled and vengeful vampire hunter has arrived on the island. She has sworn an oath to destroy Baron von Stoke before the blood moon’s omen can come true.