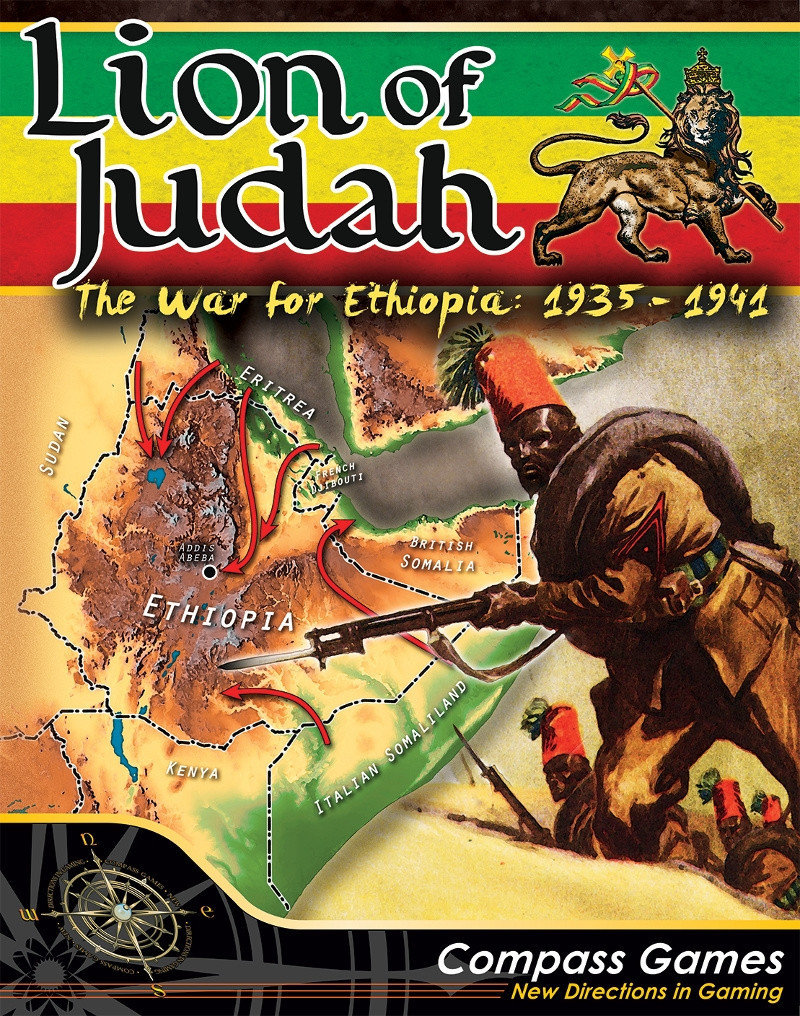 Lion of Judah: The War for Ethiopia, 1935-1941 is a two-player wargame simulating two campaigns located in the Horn of Africa - Italy vs. Ethiopia in 1935-1936, and the British Commonwealth and Ethiopia vs. Italy in 1940-1941). The scenarios all use a common rule set combined with scenario-specific rules. Regular units are mostly divisions, brigades and regiments, while irregular units include warrior levies and tribal bands. Armor, transports, air power, and headquarters (which represent corps-level artillery assets, engineers, and administrative and command centers) are also represented.

Lion of Judah has one large-hex map and approximately 400 counters representing Italian, Ethiopian, Commonwealth, French and German units.In addition to the military units, there are markers to track game and unit status, as well as several Random Event markers used in the historical scenarios for added historical flavor.

The campaigns for Ethiopia were fought in extremely inhospitable terrain. Logistics was one of the key issues of these battles. This is simulated in Lion of Judah by supply counters: everything a modern army requires to operate, from replacements to ammunition to artillery, has to be moved across the harsh terrain. Western units have far more firepower that the Ethiopians, but much lower movement rates. This simulates the “safe” rate of movement for western units when moving across difficult terrain. They had to move through jungles, mountains and marshes, relying on local guides to move through this mostly-unmapped terrain.

Supplies often had to go by air due to lack of a road network. Western forces may attempt to move at a more “normal” movement rate (using the “Forced march” table), but this entails risks: units may get lost, run out of supply, lose their pack mules, or even be ambushed. Unlike the Italians, the Ethiopian army of 1935 was a medieval-style collection of warriors, with little or no central command. This is simulated through activation rules: Ethiopian forces are activated randomly, and some may end up not activating at all during an entire turn! The Italian player may also “bribe” certain Ethiopian formations into inactivity, as they did historically.

Both historical campaigns have conventional and unconventional warfare. In 1935-36, the Ethiopian army engaged a conventional Italian army in the north and south, while at the same time fighting rebels and tribal guerrillas in the far off corners of the Empire. In 1940-41, it was the Italian Army who had to face both a conventional, professional enemy (the Commonwealth forces) and Ethiopian guerrillas and Commonwealth special forces operating in its rear.

To win, players must successfully manage both kinds of warfare, guerrilla and conventional. When invading Ethiopia in 1935-36, the Italian player must invest resources to encourage trouble within the Ethiopian Empire, recruiting irregulars, bribing and encouraging rebellions. If the Italian player concentrates exclusively on the conventional military front, then the Ethiopian Empire will have a chance to concentrate its armies and achieve a resounding, glorious Adowa-like victory over the Italian invaders.

Similarly, in the 1940-41 campaign the Commonwealth/Ethiopian player must raise rebel forces to force the Italian player to use desperately needed units to defend their lines of communications and cities. Furthermore, the Italian player has an 'Italian Prestige Index', which determines the chance of internal revolts.He must attack British held territories and outposts as much as possible to keep his Prestige high, especially early in the game before the full might of the Commonwealth army can be brought to bear. The uncertainty regarding Italian defeats in Libya (handled via event chits) adds further randomness as it is not guaranteed that the British and Indian units that were historically available in January 1941 will arrive in time for the Allied counteroffensive in Ethiopia.

Diplomacy and other Chrome

A random events system similar to that used in The Spanish Civil War accounts for political and diplomatic events, rebellions in the rear, the arrival of combat units, the purchase of foreign weapons (in the 1935-1936 Scenario) or the arrival of blockade runners to Italian East Africa. Pressure exerted by various political actors is also simulated through events chits: for instance, the event “Pressure by Mussolini” (1935-36 Scenario), simulates pressure from il Duce when he demanded a rapid advance on to Addis Ababa before he lost the favorable international situation. The Italian player may use chemical weapons, but at the risk of losing Italian Victory Points if the “League of Nations” event is pulled that turn.