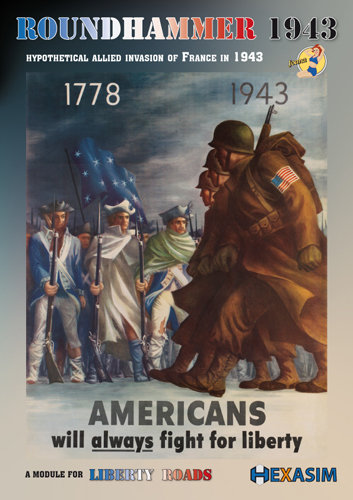 At the start of 1943 Churchill and Roosevelt had divergent views on the conduct of the war. The British Prime Minister favoured a strategy which focussed on the peripheries of Europe: Italy was a ripe fruit ready to be plucked, via Sicily. For the American President on the contrary, Germany was the sole objective. The enemy was to be struck right in the heart of his war economy, the Ruhr, and by the most direct route: France! Two operations are studied in the game: “Round up” and “Sledgehammer” which for the Anglo-American general staffs quickly became one operation, “Roundhammer”.

The Trident conference in Washington in May 1943 gave Churchill his way, clearing the road for the invasion of Italy. The Quebec conference in August 1943 (Quadrant) cancelled Roundhammer definitively in favour of the future Operation Overlord in 1944, developed in the game Liberty Roads.

But what would have happened if the allies had dared to launch Operation Roundhammer in mid-September 1943, as the generals had planned?

At this date, the Atlantic Wall defences were still barely started on many beaches. A large number of the German divisions in France at that time were undergoing training and were not yet operational. As for the Panzer Divisions, they were not yet equipped with the formidable Panther tank.

The Roundhammer 1943 module allows you to supply an answer through this what-if game ! The extension of Liberty Roads includes those extra units present in Western Europe at the time, along with new supports and Atlantikwall/D-Day markers, with a ‘1943’ ambience.

Requires the base game in order to play this module.