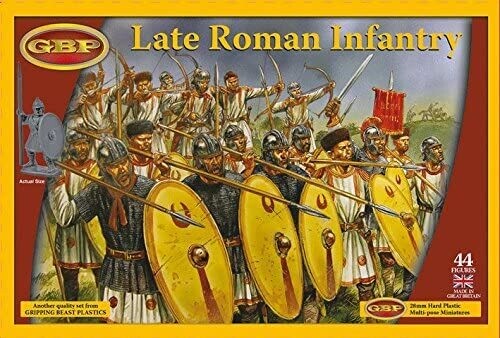 Inside you will find parts to assemble 40 finely-detailed ferocious Late Roman Infantry, armed with either swords, spears or bows, suitable for use in Swordpoint. The box also contains extra parts to assemble two of your soldiers as Officers, as well as two musicians or standard bearers. The average soldier of the late Roman Empire could be found serving on the frontiers of Britannia, Germania or even in the east in Syria. By this time in Rome’s history many of the legions comprised of auxiliaries recruited from a variety of vassals and allies, including Germanic tribes such as the Franks and Goths.

PS, Don't know if you've spotted it but, if you get some 25mm round bases and a big one for your Warlord, this box also makes a 6 point SAGA Warband!