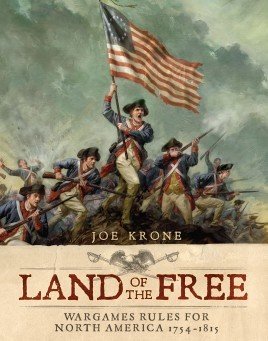 Land of the Free is the new set of wargaming rules from Osprey that allow players to recreate the various conflicts that broke out in North America shortly prior to and just after Independence, including the French and Indian Wars, the Revolution and the War of 1812. This set of rules lets players begin their campaigns with small warbands of 10-20 miniatures of any scale and develop their forces over time, building them into armies hundreds strong. A unique system of command points and the need to carefully manage resources or risk becoming vulnerable to counter-attack have to be finely balanced against the need to gain objectives throughout the game, creating a challenging, but enjoyable environment for your armies.