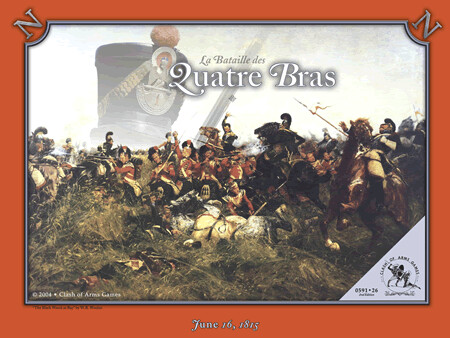 La Bataille des Quatre-Bras is the second of five boxed sets detailing the climatic moments of Napoleon's last 100 days as Emperor of the French.

Marshal Ney, hastily entrusted with the left wing of L'Armée du Nord, sweeps across the Belgian frontier. As Napoleon probes an indeterminate force of Prussians massing along Ligny Creek, he orders Ney to continue the drive up the Brussels highway and seize the important crossroads of Quatre-Bras. Here he will be poised to fall on the Prussian's open flank should they confront Napoleon. Ney knows full well that possibly, somewhere among the tall corn and light woods ahead, awaits the Duke of Wellington at the head of nearly 100,000 Anglo/Allied troops. Ney has been beaten too often in Spain by Wellington, a cautious advance would perhaps be best for now.

La Bataille des Quatre-Bras reproduces this fateful encounter on one 34"x22" period map with nearly 600 stunning unit counters (including every Anglo/Allied unit found at Waterloo two days later). The small size of this game makes it ideal for players to learn the system. For the grognards, La Bataille des Quatre-Bras is fully compatible with La Bataille de Ligny, and when played together they form the grandest simulation ever presented for 19th Century enthusiasts.