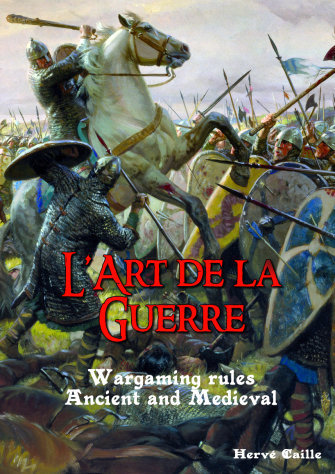 L'Art de la Guerre is a set of rules for miniatures that allows you to fight battles ranging from early Antiquity (3000 BC) to the end of the Middle-ages (1500 AD). Each player commands an army of twenty or so units.

The system allows you to play with miniatures of any scale from 6 mm to 28 mm, including 1/72nd scale plastic soldiers. The basing system is fully compatible with DBx and therefore allows you to use your existing armies.

The rulebook for L'Art de la Guerre also includes all the army lists you will need for the Ancient and Medieval periods as well as for the pre-Columbian Americas - no fewer than 283 of them!

Everything is included in one book, so there is no need to buy lots of expensive supplements. Additional army lists will be released later for the Renaissance period and for Fantasy armies.

L'Art de la Guerre offers a range of formats with regard to playing area and numbers of figures. The 200 points format of L'Art de la Guerre requires as few as half the figures of some other rules. This means that players can build up new armies faster and cheaper. The playing area in this format for 15 mm figures is 120 cm by 80 cm and for 25-28 mm figures is 180 cm by 120 cm. However the larger formats also allow fans of big battles to play on larger tables with more figures.

A game of L'Art de la Guerre can be played in less than two hours when the players are familiar with the rules. This allows you to play more than one game in an evening and also makes tournaments easier to organize.

L'Art de la Guerre is a simple and realistic rule set, clearly written and well-illustrated with many diagrams and examples. The principles that guided the development of the rules are: