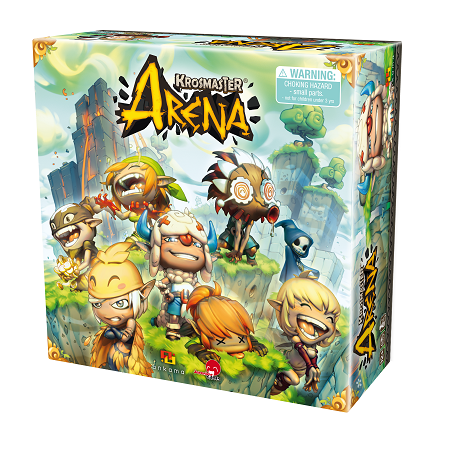 Krosmaster Arena is a PvP-orientated card game that offers the lustiest warriors among you the chance to challenge other players to heated battles in arenas scattered around Hormonde.

All players begin with the same number of points which they use to build a team of characters whose various talents must fuse to form a versatile and powerful fighting force - only those with the perfect strategy will prevail.

In Hormonde, a strange world deep in the folds of time, the Hour Demons have finally found a hobby worthy of their cruel hearts... the Arena! The idea is simple. They select warriors of all ages and lands and whisk them away to the Hormonde where the enslaved gladiators must fight for their souls and the chance to become the ultimate champion.

Why don't the gods put an end to this macabre circus? Why does Xelor himself turn a blind eye to the demons' meddling with time's delicate web? Well you may ask, but it is not for us mortals to know the minds of the gods.

Intense combat in which all participants have equal chances of victory. Starting out with an identical budget of points, all combatants seek to assemble that perfect team of fighters - a fearsome unit with limitless versatility.

A team of characters to guide

All players create their own characters and equip them with spells, weapons and items adapted to their requirements. This process is repeated until players have built a full team of fighters.

Krosmaster Arena is played with cards which players use to cast spells and equip items, while randomly drawn "event cards" spice up the game at each turn.

Wining condition for each game are different and go according to scenarios you choose to play.