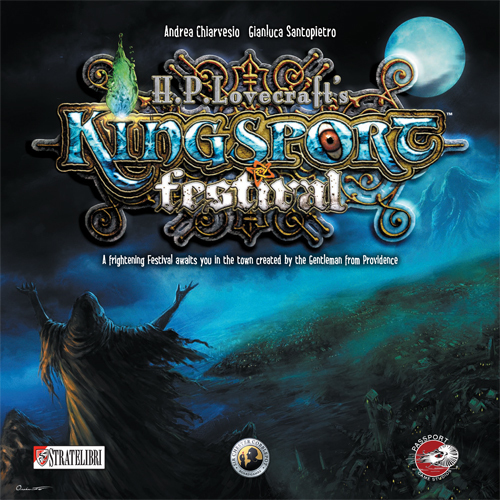 Lovecraft may not have said it, but we will: It’s fun to be bad…if you can hold on to your sanity!

In Kingsport Festival, players take the role of cultists attempting to invoke unthinkable horrors. Yes, it’s called Kingsport Festival, but only the truly twisted would call this profane celebration a party. A dread terror calls from the places between the stars and demands your submission. It’s up to you, and your fellow cultists, to summon all manner of otherworldly terrors. Valiant investigators will attempt to thwart you at every opportunity, but will you let them?

The game’s design is inspired by the wonderfully terrible works of H.P. Lovecraft. With beautiful, distinctive art and an easy-to-grasp play style, the game is designed to allow players to focus on the important thing – unleashing chaos and mayhem in Kingsport!

A game of Kingsport Festival lasts 12 rounds, each divided into six phases. All Cultists roll their dice and the one that rolled the lowest sum will play first and so on, then (in turn order) each one may invoke an Elder God by using one or more of his dice, where the sum of their values is exactly equal to the number of the Elder God, or pass. Once all the dice are placed or players have passed, in ascending order, the Elder Gods give their gifts to the Cultists who invoked them: the Cultists may have to lose Sanity points to receive the rewards. After Cultists have taken their dice back, in turn order each one may place his disk on one Building that is connected to another one he has already marked (starting from the House). To do so, he must pay the Domain resources required.

In turns marked with a blue marker on the Calendar, a Raid takes place: first the Event card and then the Investigator card is revealed. Each Cultist calculates his Strength by adding up any modifiers he has due to Spells, Buildings, and other game effects (such as Events, Scenarios, etc.). If his strength is greater, the Cultist receives rewards; if is less, he suffers the penalty.

The game ends after the twelfth round is played. If the Scenario has a Festival card, it is revealed and its effects resolved at this time.

The Cultist who has the most Cult points is the winner.