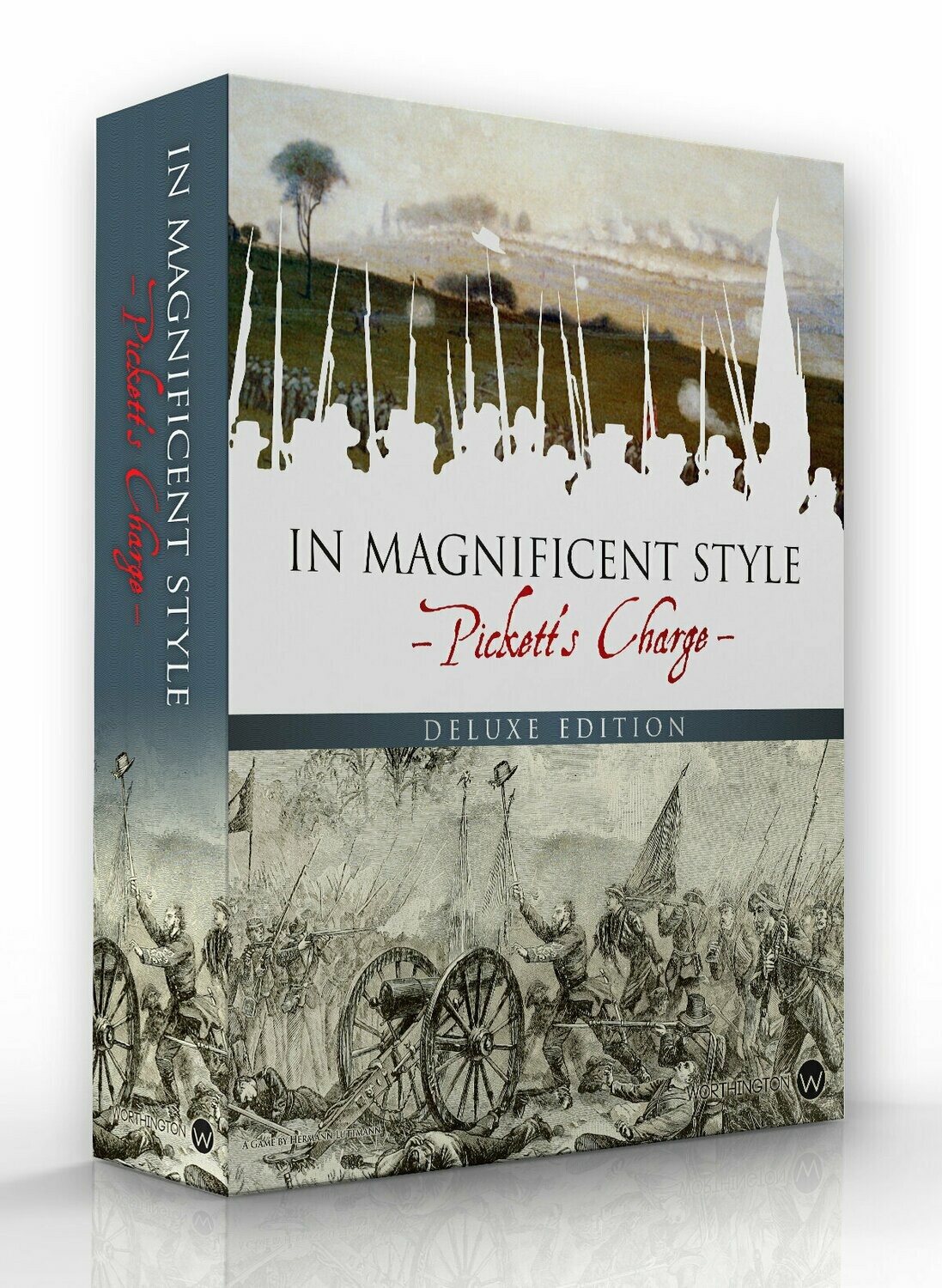 “Pettigrew's front rank advanced in as magnificent style as I ever saw.”

In Magnificent Style is a solitaire game depicting the final desperate Confederate attack on July 3, 1863 at the Battle of Gettysburg. You command the Confederate brigades that made Pickett's Charge.

General Lee’s Army of Northern Virginia has been fighting General Meade’s Army of the Potomac for two brutal days at Gettysburg. Lee’s army has garnered some successes but could not achieve that decisive break through of the Union lines. On the third day Lee, despite resistance from his trusted “Old Warhorse” General Longstreet, decided on a massive assault against what he deemed to be the weak spot in the Union battle line. This dramatic, infamous assault is popularly known as Pickett’s Charge.

The game system features some new takes on the traditional “push-your-luck” mechanic and applies them to a war game setting. As General Longstreet, you must decide how quickly to press your advancing troops across the deadly open ground before allowing the men to regroup themselves for another bound. But time is not on your side and the longer your stalwart soldiers remain in this maelstrom of enemy fire, the more dangerous it becomes and the less likely they will arrive with the verve and numbers required to carry the day.Good luck!

The game map is rich in detail of the mile long valley between Cemetery Ridge and Seminary Ridge.You command the nine Confederate brigades that made Pickett's Charge across that valley In Magnificent Style in one of history's most famous charges.

Cards are now used for the events that occur to your advancing brigades.Each card has a Union event and a Confederate event.Which half is used is affected by your Confederate brigade movement and Union responses to your movements.

Players can record after action reports in the Battle Archive Booklet.This booklet can be used to compare your performance from game to game.It has a mini map on each sheet for players to mark how far each brigade advances and the state of each brigade as they advance. The booklet helps you track your progress by each game and develop various strategies for your next contest.

The basic flow of the game is that you will move each of your nine Confederate brigade units every turn. There are only five Game Turns, so there’s not a lot of time! With each brigade unit, you must roll the Movement Dice the first time it activates each turn. After that, you have a choice to continue moving the unit by again rolling the Movement Dice or you can choose to stop it and Regroup (basically consolidating its position).

Along the way, the unit will be taking casualties and have its willpower tested in other ways. In addition, the Union army will respond to your movements through event cards drawn each turn and all sorts of random events will be occurring around the battlefield while your units advance. Your ability to manage these challenges and exploit any offered opportunities will ultimately determine your level of success or failure. Good luck!