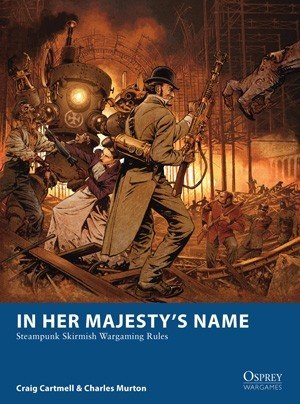 It is 1895 and the world is in turmoil. The Great Powers compete for resources and the latest technology, and an undeclared and secret war rages between them all. This is battleground of the Adventuring Companies. These clandestine agents of the Great Powers operate in the shadows, matching skills and wits in pursuit of the newest scientific formulae or powerful occult artifacts. In Her Majesty's Name sets these adventuring companies against each other in one-off encounters and in longer narrative campaigns. Companies are usually comprised of just 4-15 figures and two players could easily play three games in an evening, making an on-going campaign a highly viable option. In Her Majesty's Name has been designed to allow maximum versatility for the player - if you can imagine it, the system will help you build it. There is, however, a wealth of material provided in the book, covering weird science, mystical powers, and a range of pre-generated adventuring companies, including the British Explorers' Club, the Prussian Society of Thule, the US Marine Corps, the Légion Étrangère, the revolutionaries of the Brick Lane Commune, ancient Egyptian cults, and the mysterious Black Dragon Tong.